The effort it takes to build something new often is viewed as a source of frustration.

However, a new manufactured home community, like one being developed in Ormond Beach, Fla., with approval to clear and level, start utilities and lay out a site plan certainly is cause for celebration.

What is the Trend for New MH Communities?

About 310 new manufactured home communities were built nationwide since 2002. Note the 2,645 new communities during the prior 15 years, including 395 communities built during 1986-87 alone. Comparatively, it’s easy to understand why affordable housing advocates are concerned.

Ormond Beach Commissioner Dwight Selby serves Zone 1 where the new community is located. Additionally, he serves as treasurer for the Florida Manufactured Housing Association and co-owns the nearby Shady Oaks manufactured home community.

“I think it’s important to stay focused on providing housing for all kinds of income, not just the rich and uber rich,” Selby said. “We have a huge gap in affordability. Most builders aren’t putting up anything below $250,000 – $300,000, and the developers at Plantation Oaks are coming in at half that. It’s a way more affordable number for a lot of people.”

Developers Parker Mynchenberg and Ronnie Bledsoe prevailed in their efforts to bring about Plantation Oaks of Ormond Beach.

“We’re selling the lifestyle, the amenities, the gated entry,” Mynchenberg said of the 55+ community.

Plantation Oaks is near the intersection of I-95 and U.S. 1, north of the municipality. The plan includes annexation of the unincorporated property when phase one is complete.

Phase one of the development calls for 427 lots. The final project will include 1,577 home sites.

“We were just held up for a bit and got back at it,” Bledsoe said. “We’re in a great location to do this. Ormond Beach is among the nicer communities in the area. It’s a great place to live.”

Two- and 3-bedroom homes in the new manufactured home community will range from 1,200 to 2,400 square feet. Prices are between $120,000 and $200,000. The community will operate as a dealer for homes from two makers, Homes of Merit and Palm Harbor. Homeowners can rent the land their home sits on for about $700 per month.

“The rents will vary a little,” Bledsoe said. “Depending on whether you have a waterfront lot, a premium lot or a lot that borders a preservation area.”

Add to that, each home will have a front porch, and a two-stall garage rather than carports.

The Obstacles for a New Manufactured Home Community

Mynchenberg affirmed the reasons why the development of a manufactured home community takes some endurance.

“Zoning is difficult,” he said. “The second reason why this type of development is rare is because of the infrastructure cost up front. When people move in, you get paid back over time with the lot rent… it’s hard to find funding.

“Once they’re leased up, they’re sought after by investors,” Bledsoe said. “Not so much when they’re being developed.”

Commissioner Selby said bridging that gap should be a priority locally, and nationally.

“It’s a total mystery to me how a product class can be so attractive, yet there are no people chasing new deals,” Selby said. “It relates to financing and delayed returns, but all that being said, somehow we have to figure this out.

“There needs to be a mechanism whereby new communities can be built,” he said.

That said, Selby points to the wave of Baby Boomers who will retire to Florida and other warm weather places. If there are homes for those arrivals to live in, Florida’s economy can reap the benefits.

“Boomers add a lot and require very little,” Selby said. “We should prepare ourselves before they advance to an age where more community services will be required.” 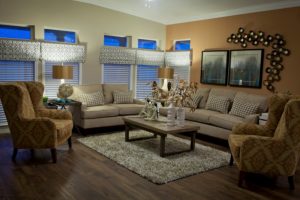 “We’re doing a 10,360 square-foot clubhouse with café and large kitchen, as well as community rooms to play cards, exercise and meet friends,” Mynchenberg said.  “Out back are covered and screened porches that overlook an Olympic size zero entry pool. It’s ADA accessible, and very good for seniors.”

Mynchenberg is a civil engineer, landscape architect and pool designer. Bledsoe has significant experience as an underground utilities contractor. The two have teamed in development efforts several times, including on Plantation Oaks of Flagler between 1998 and 2004. They sold that community and purchased the Ormond Beach property, waited out the recession and in 2012 worked on re-zoning for manufactured housing.

The median home price near the coast is significantly higher than the cost at Plantation Oaks. However, Bledsoe and Mynchenberg have declined to advertise the community as affordable housing.

“I think if you asked the customer about the high point, it’s not affordability, it’s lifestyle,” Bledsoe said. “We’re proud of this community. We’ve had a huge response. When we put up the billboard alone, I can’t say how many emails we received.”

The first model homes were placed during the fall, model homes will be open for a walk-through in the spring and all infrastructure and amenities will be complete by the time residents begin to move in by early 2019, Sales Director Doug Kamm said.

Plantation Oaks is hosting an industry open house on March 20, and will have a grande opening April 4 with three days of home and community tours to follow.

Kevin Clayton Works for the Industry, for the Homebuyer