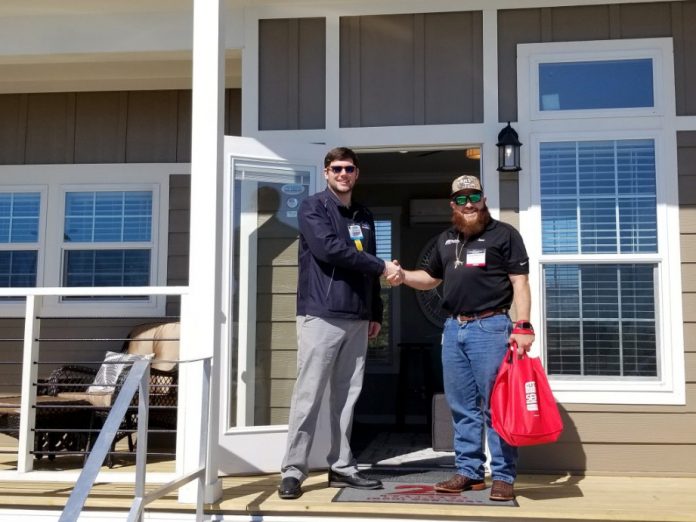 The 2018 Tunica Manufactured Housing Show Fields Great Traffic, Much Learning, and Many Sales

Daniel McClure sells Athens Park Model RVs, often purchased for communities and lakeside properties. He and his colleagues attended the 2018 Tunica Show, and they’re glad they did.

“This is a record year for park models at Tunica,” he said. “It’s been a really good year. We have this new Model 520, which is a higher end product, and we brought the APX 150 that is a smaller and lower price point that addresses a lot of the industry demand.

“We are marketing both sides of the terrain, so people are getting what they need,” he said. “We’re appealing to both sides. I’m going to guess we’ve signed 20 orders for these park models, which is great. That’s three, four weeks of work for us at our factory.”

Athens is a division of Champion Homes, which was celebrating at Tunica 50 years of manufacturing homes in Tennessee.

“I sell more Champion than anything,” Mingus said. “These are really good homes.”

A Good Show for Sunshine Homes

Sunshine Homes had seven models at the show, four multi-section and three singles. Customers know Sunshine Homes are well built, and are catching on to some of the finishing touches too. Sunshine Homes’ Gary Dobbs credits his sister, Sunshine VP Lindsey Bostick, for much of that success.

“We’ve kind of put a millennial flash to our homes,” Dobbs said. “Everyone loves the color schemes, and window treatments, surface materials. People walk in and see the attention we pay to these details and that helps us out.

“Tuesday was the day,” he said. “We really hit the ground running and sold several homes. We are enthused, the industry has really picked up and everyone is in a good mood.”

Inside the exhibit hall at the Hollywood Resort and Casino, industry product and service providers reported similar success. Attendance was up 4.5 percent compared with the 2017 show, with 2,147 total attendees, including 1,131 builders, installers, community managers and retailers.

Denise McNeil, a design consultant for Jaime’s Interiors, said she’s attended the show for more than a decade. New customers, she said, were coming to the booth after seeing some of her work inside Fleetwood and Platinum model homes on display.

“I’ve had a lot more traffic this year, as far as new customers,” she said. “It’s people who have seen our work in the homes, heard about us by word of mouth.

“We’ve had a lot of people come to our booth and sit and talk. It’s bright and comfortable, and people like to spend some time here,” she said.

Jose Tavarez is an origination manager for eLend, with offices in Parsippany, N.J. and Charlotte, N.C. This year was his first at The show and had plenty to report for the Tunica wrap-up.

“I’ve learned a lot,” Tavarez said. “It’s great to see the actual finished product when you’re really used to seeing the specification sheets and floorplans, which is largely what you deal with in lending. The quality of these homes and for such a great price point, it’s really impressive.

“I want to go back and put together a team building day where we’ll find a nearby factory and do a tour and learn more about the process and the homes,” he said. “It’s very valuable to have that first-hand knowledge.”

Jennifer Hall, Director of the Mississippi Manufactured Housing Association and co-organizer of the Tunica event, said reports have been positive in 2018, and should mean good things for the months and years to come.

“I love coming to the show and learning about all these great ideas,” Hall said.

“You can really see that manufacturers are listening to their customers and providing them with more of what they want. You’re seeing a lot of features in single-sections that traditionally have been in multi-section homes, things like the metro hood above the range, a farm sink, utility rooms and barn doors.”

For Michael Koczwara, an outside sales representative with Oliver Technologies, it was his first time at the annual Tunica Show.

“Traffic has been pretty good really. It took some time to get going on Tuesday, but Wednesday we were all really busy,” he said. “We come here to showcase our product, build awareness, have some time to spend time with the customer and forge that relationship. We sell to the set-up crews. So, this is not really our true customer, but the people we meet here are the end user. It’s important for them to know what we do, how it influences the quality set-up of the home. And to learn from that customer is very valuable.”