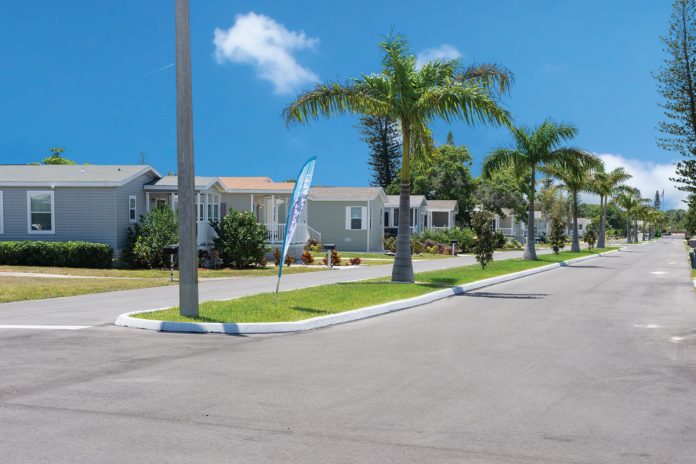 A  55+ manufactured home community that rose from the ashes in St. Lucie County, a short drive from Fort Pierce, is extending a hand to pull up its adjacent sister community, which will bear a new name and an array of amenities for families in South Florida.

Seventeen years ago residents in St. Lucie County ducked and covered as a system of Atlantic storms — Charley, Frances, Ivan, and Jeanne — pounded the southern coastline, driving area residents from their homes, including those at Sandhill Shores.

“A lot of homes were destroyed and people weren’t able to come back home,” YES Communities Senior Vice President Shawn Harpin said. The Denver-based community ownership group inspected Sandhill and its adjacent property, interested in the possibility of a purchase.

“We went down to get a feel for the asset and the surrounding area,” Harpin said. “I remember saying out loud ‘This is a great location’. You’re a couple of golf strokes from an outdoor recreation area, Savannas State Park, with camping, boating, fishing, and picnic facilities, and it’s a five-minute drive to downtown Fort Pierce.”

The Market is Hot in South Florida

Harpin said if anyone was to inquire in March about the pace of sales — the expectation for continuing to fill one property, and developing another amid the challenges of the pandemic — he would have cringed a little, maybe, and certainly would have hesitated.

Today, the story is told.

Sandhill was about 30% occupied when YES Communities purchased the property in August of 2017, and it since has added about 130 homes.

“We are 70% occupied now and we’re hoping to have the community full in the next two years,” Harpin said.

“In this area on average there’s been a 23% in drop in inventory from a year ago. Housing prices are higher than 2006. Additionally, as the impact of the pandemic eases, the demand for housing, especially affordable housing, will increase,” he said.

When the eviction moratorium drops, it’s going to change not just for us, but all around. The demand for housing, especially affordable housing, cannot be overstated.”

Homes at Sandhill Shores come from across the state line in Waycross, Ga., from Clayton’s home building facility there as well as some from the ScotBilt Homes facility.

Sandhill sits on more than 58 acres and eventually will have 375 homesites. It is a gated community, with a gym, shuffleboard, swimming, outdoor pergola kitchen, putting green, horseshoe pit, pickleball, fire pit, and game room.

All of the homes are for sale, Harpin said. But the community does have a small number of park-owned rental homes as well.

The demand for housing is so high that YES is reviewing the option to convert many of the RV slips in Sandhill back to manufactured housing homesites. And it purchased the adjacent community and built a plan to have it complement the existing housing stock for homeowners and renters with families.

The New Community That is Savannas Ridge

The neighboring community to Sandhill, just across a small canal, once was a place called Pleasure Cove. The communities were planned and zoned at the same time, under the same ownership. Pleasure Cove changed hands from its original ownership, was held up by a management company, went into receivership, and was fee-managed for a time before development was halted.

“We knew the company that was looking to sell the property, and Steve Schaub and I were talking about it, and we could tell they wanted something positive to come out of it,” Harpin said.  “We made the purchase, got city approval and right now we are in the assessment stage, cost and timewise, on what it’s going to take to bring this community up to what we want it to be. We are hoping by the fourth quarter of ‘21 we’re breaking ground.”

The community has underground utilities and a former clubhouse with “good bones”. Savannas Ridge and its 32 acres will have 209 homesites, a renovated clubhouse, swimming, and a playground for individual residents and south Florida families.

“We want to work with the city to provide a connection from the communities to the city greenbelt,” Harpin said. “That’s been part of the vision from the beginning, and it’s something I feel confident we can achieve given the relationship we have with the city and surrounding community.

Harpin said some of YES’ success in the area is attributed to is the city’s realization that YES is a  partner with many of the same goals, not just an organization looking to get in, win a buck, and get out.

The connection between what Savannas Ridge will be and what the public recreation area is creates a lifestyle mix that both retiree residents at Sandhill and all-ages residents the emerging community value.

The locale is the common denominator that will make each property a success.

“Savannas Recreation Area is a rare wilderness area, and just happens to be our neighbor in Fort Pierce,” Harpin said.