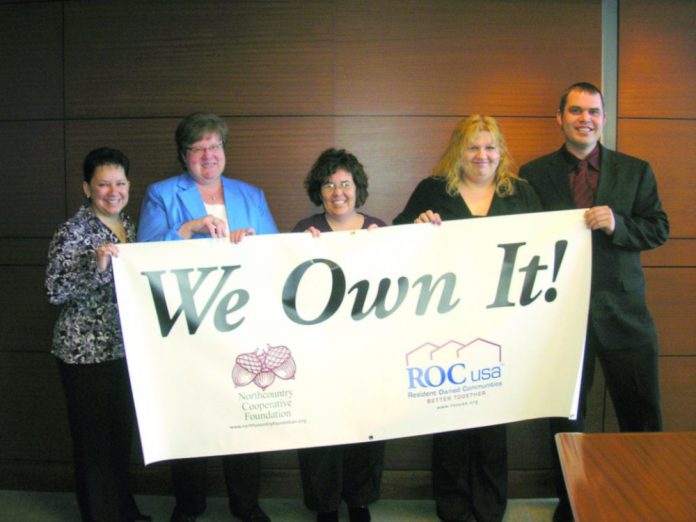 Homeownership is a giant step toward independence for many Americans, but often it’s far from the last step. For those who own a manufactured home, the formation of a resident-owned community may be the path to a sustainable housing solution. Mike Bullard and others at ROC USA, a New Hampshire-based nonprofit, help residents ask “why not?”

ROC coaches residents as they form coalitions and navigate the tricky waters of purchasing property.

Residents — the majority of whom already own their homes — form a co-op and board of directors. Each community member pays a price up front to join the co-op.

That amount typically is between $240 to $500, which also helps establish buy-in for the effort.

This model began at the New Hampshire Community Loan Fund in 1984. “Don’t lose the nun’s money,” became a common mantra after they made their first purchase with the Sisters of Mercy fund.

ROC residents lead the community together. They control who to admit, how to screen candidates and, of course, how to spend the money.

Each member becomes a shareholder, owning a percentage of the park’s land as a whole, rather than simply owning what’s beneath them.

This means it’s in each landowner’s best interest to help their neighbors. Monthly rent goes to the community, often used toward maintaining or updating the community, for garbage, snowplowing or landscaping.

As a result, community relationships improve as well. “People always used to say they knew their neighbors, and maybe a few other people in the community,” said Bullard, communications and marketing manager for ROC USA. “It runs a lot deeper now, and I hear it all the time as I walk through a community.”

One Resident-owned Community in Minneapolis

Natividad Seefeld, board president of Park Plaza, a ROC near Minneapolis, uses the co-op model to create a thriving community.

As a fellow resident, she has vested interest in developing ways to improve the park. Seefeld organizes nights out against crime and lines up funds for huge projects. These include a new playground, paid for by raising private donations through the ROC USA website. Park Plaza also replaced the water system. One winter, in the middle of a cold snap, a pipe burst under a house. Water gushed out onto the street and froze.

The co-op had to bring in a crane to lift the house to remedy the immediate problem. Later they were able to fix entire water system.

Each year, ROC USA transforms an average of 15 parks. One of the most important aspects of the mission is the time spent with community owners, brokers and realtors. These are the professionals with an inside track on what communities are coming up for sale.

ROC USA aims to gain information through these connections and supporters. The organization’s employees inform everyone they meet how selling to residents can be the most beneficial exit strategy.

“Many community owners aren’t particularly interested in even contemplating a resident purchase,” explained John Wiltse of Pathstone, a nonprofit in the ROC USA network. “It’s different from the traditional business model.”

Pathstone is a CTAP, or Certified Technical Assistance Provider, one of nine nationwide. These nonprofits focus on making ROC known and building partnerships locally. This is done through joining the state manufactured housing association or by showing up at an industry-related event.

There is a prime challenge supporters face when attempting to convert a community owner to ROC’s cause, Wiltse explained. It takes effort to convince owners that the residents are good buyers, and ones capable of taking over the operation of the community.

“Many may believe their homeowners could never do what they do and have concern toward disclosing any part of their operation to their homeowners,” Wiltse said. “They’re used to a business model built around limiting access to that type of information, and they’re concerned that if the community goes to sale, everyone would leave or stop paying rent.”

Wiltse argues this belief is unfounded, but residents, too, often doubt their ability to own land and run a community.

How to Create Buy-in

To show the residents it is indeed possible for them to get a loan, pay for the land, and manage the park, ROC USA offers a skills survey at the start. The goal is to identify people in the community who can serve as treasurer, bookkeeper or secretary.

“People don’t necessarily know the talent in their own community,” Bullard said.

In the beginning, residents can be “skeptical and jaded” with conversation between a willing park owner and the resident group, Wiltse said. But with time, a light comes on in their eyes as the potential for ownership builds.

ROC USA’s devotion to connection-building and overcoming obstacles has led them to a 100-percent success rate with their communities. Each community to enter an agreement with ROC USA has maintained payment on the property and continues to effectively operate it.

ROC USA continues educating people in the industry, and organizers hope selling to residents continues to have a growing place in the market.

Visit ROC USA to find out more about the work it does, and contact them here.