UMH Properties was the title sponsor for the Second Annual Independence Bowl in Northeast Ohio, a hotbed for high school football talent nationally. 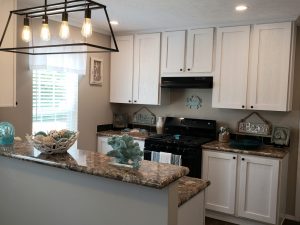 Ohio Manufactured Housing Association Executive Director Tim Williams saw limited action in the game, a summer scrimmage. He joined his much younger teammates, including his son, Todd, on the field.

The victory came on the arm and legs of 2010 all-state and former college quarterback Bryan Jones. He rushed for nearly 100 yards while throwing for more than 200 yards, including three touchdowns through the air.

UMH’s industry promotion comes on the heels of its home display on the National Mall in Washington, D.C. The company also has been a primary sponsor of the Eastern Ohio Manufactured Homes Show.

“The tremendous and innovative promotions of our industry by UMH in non-traditional settings present our homes to an expanded demographic of future consumers,” said Williams, a former Northwest football player. “Numerous fans at the June Bowl game expressed their amazement at the quality, amenities and ‘wow factor’ of the UMH home. OMHA also thanks UMH for its promotion of our industry in Ohio.”