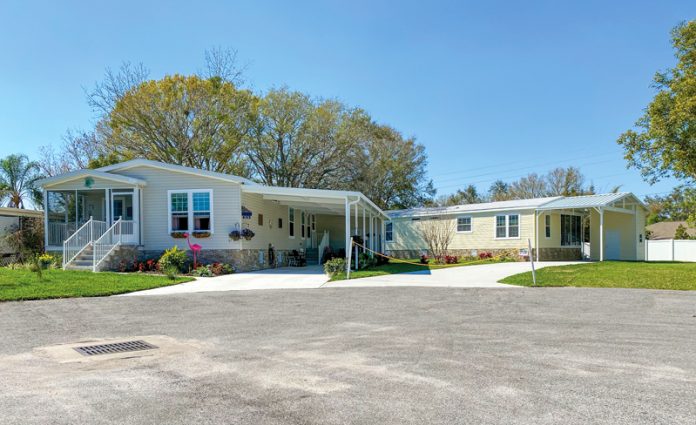 After decades of minimal new development in the manufactured housing community sector the pace is increasing for a variety of reasons, not the least of which is the current stock of aging properties and a need for updated infrastructure and amenities.

New manufactured home communities, built from raw land, have been hampered by zoning difficulties, NIMBY (not in my back yard) pressure, lean access to financing, regulatory burdens, and a general misconception about the value of manufactured housing.

Since 2002, the number of new “ground-up” manufactured housing communities nationwide remains low, something less than 400 nationwide. As a matter of reference, in the 15 years prior there were more than 2,600 such communities built, including 395 in 1986-87 alone.

Michael Callaghan is a managing partner at Four Leaf Properties, an Illinois-based owner and operator of manufactured home communities as well as a professional third-party manager for community owners who desire or require added resources.

Callaghan said he and his team have been working with increased regularity with operators interested in developing new communities, so much so that Four Leaf has formalized a new business unit within the company to manage and pursue that work.

“Cap rate compression and the demand for vacant lots has taken us to a point where we’re now spending almost as much for a vacant lot with 1970s infrastructure as a newly developed lot with new infrastructure,” Callaghan said. “The trick to land sourcing, as an alternative to existing communities, lies in finding a location where the demand for the product is met with an equal amount of municipal support. It’s as if you’re contending with two buyers, the end-user and the municipality. You need to see demand from both sides to make a project viable.”

Callaghan emphasized that community owners have become developers by necessity, driven by the massive shortage of affordable housing. Historically that has been addressed in the manufactured housing industry through the expansion of existing communities. However, that opportunity is gated by limited land for planned expansion and availability of adjacent property that can be acquired and entitled.

Financing for new communities also continues to be a hurdle, but interest rates for commercial real estate loans remain near historic lows. Those rates and the rapidly growing demand for housing, along with housing price escalation, has captured the attention of policymakers and legislators alike.

“Despite the challenges, if you can find the right piece of property, the math works all day long,” Callaghan said. “I don’t think that was the case even five years ago.”

A Strategy Toward New Community Development

Florida, Texas, the Carolinas, Colorado, and Arizona are leaders in recent years among locales for new manufactured housing developments.

Following the sale of Four Leaf’s portfolio in 2018 sale to Yes! Communities, one of the nation’s largest community owners, the company began to aggressively acquire with a development focus in some prime locations.

Four Leaf owns and manages communities in Florida, Indiana, Michigan, and Texas. Callaghan said the new development group currently has about 2,500 sites underway, or in entitlement awaiting development. More than half of those homesites will be available for occupancy home placement and occupancy by the end of the year.

“We learned by executing smaller expansions at several of communities,” Callaghan said. “It was 20 spaces at a time developed a bit informally. Over time, however, we identified the resources and established the processes to take on bigger projects moving forward.”

The development strategy is approached as a joint venture between Four Leaf, the community owner/developer, and local governments. Callaghan said preemptive sales and marketing efforts, thoughtful staging and phasing, a designated construction entrance, and good communication with residents throughout the development cycle are just a few of the keys to success in developing new communities.

“You don’t have to bite the apple all at once,” Callaghan said. “There is an option for putting in utilities and developing homesites prior to full development of infrastructure and amenities, taking the sting out of the owner and investor wait for return on investment. If you don’t have to incur all your asphalt and concrete costs before the community is filling, you can hold back a lot of your costs. But you have to do it right, and stage it correctly, because you can’t bring in 100 new residents and ask them to live on a construction site for 12 months.”

One of the remaining challenges is getting industry involvement for a new movement, a transition from traditional MH property acquisition to a focus on new developments.

“The MH market has been red hot and no one wants to pour cold water on it, but behind closed doors we’re all recognizing that paying top dollar for obsolescent infrastructure is really dangerous to the health of the business. There has to be a next step in the evolution of the MH industry,” Callaghan said. “We’re at the point where we need to match the modern nature of the home product with modern infrastructure, property design layouts and amenities. Placing six-figure assets on ten-dollar infrastructure is bad, long term, for the industry.

This is the beginning of the end for the first-generation infrastructure, but we’re replacing those old dinosaurs with way better product, better lot configurations, and that translates to a better living experiences for residents,” Callaghan said. “You’ll know we have turned the corner when you see manufactured housing developers coming into a place like metro Detroit where massive housing demand meets a glut of old product and no new supply. All the characteristics for success are in place. That day is coming.”