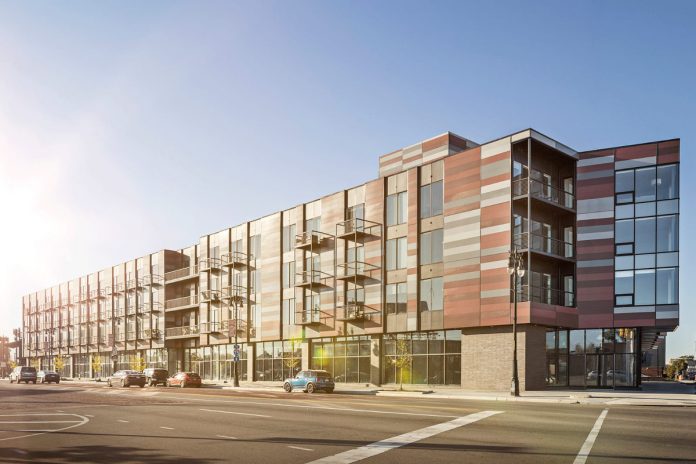 The National Association of Home Builder and the Building Systems Councils honored Skyline Champion Corporation with a pair of Jerry Rouleau Awards for Excellence in Home Design during a March 4 virtual presentation.

The Corner by Champion Modular

Champion’s Liverpool, Pa., home building facility manufactured modular apartments for The Corner, a unique mixed-use development at the site of the former Tiger Stadium in Detroit.

Larson Realty Group received the award for Multi-family Entry of Distinction for the three stories of apartment modules atop a first-floor concrete and steel podium for retail spaces. The Corner consists of 111 living units, predominately studio and one-bedroom apartments, with six two-bedroom units on each end of the building. Three larger units right on the corner of Michigan and Trumbull have views for several blocks of the Detroit city skyline.

The Wellfleet by Champion Modular

The Wellfleet model received the highest honor in the under 2,000 square foot new home category. The award-winner is a 1,650-square-foot, three bedroom, two-bath modular home also made by Champion’s Liverpool facility.

“Skyline Champion is thrilled to receive awards for both single- and multi-family designs,” Skyline Champion Corporation President and CEO Mark Yost said. “We’re extremely proud of the team at our Liverpool, Pa., manufacturing center as well as the designers and engineers that contributed to these projects.”

The annual Jerry Rouleau Awards for Excellence are judged by an independent panel of industry experts. Recipients were recognized for excellence in achievement in a range of categories such as informative and well-designed websites, along with floor plan designs categorized by systems-built type and square footage.

Skyline Champion Corporation shares are traded on the New York Stock Exchange under SKY. It employs more than 7,000 people and has 40 manufacturing facilities in the United States and western Canada. The company possesses nearly 70 years of homebuilding experience, and also operates Titan Factory Direct, with 18 retail locations, as well as Star Fleet Trucking, providing transportation services for manufactured housing and other industries nationwide.