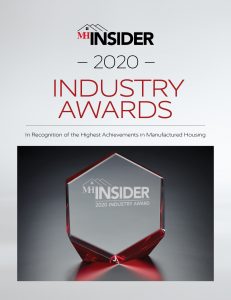 Cody Pearce, co-winner of the MHInsider Visionary Award, shares the honor with Cascade CEO Todd Kopstein. These leaders of the Arizona-based lender developed the first securitized pool of home loans in the manufactured housing industry in more than 15 years. Round one is valued at $175 million with a second larger round coming that could receive a credit rating and further shore up financing for factory-built housing.

A combination of manufactured housing industry knowledge at Cascade with Kopstein’s deep background on Wall Street and with securities provides the potential for a major breakthrough in affordable home finance that will be beneficial for all manufactured home lenders, builders, community owners, and homebuyers.

The 2020 MHInsider Industry Awards nominees for the Visionary Award included Curt Hodgson and Kenny Shipley, of Legacy Housing, and George Porter, of Manufactured Housing Resources. The MHInsider Visionary Award honors those who have brought to market the coolest concept, the idea that makes the job easier, the offering better, the customer experience more meaningful.

For 21 years I have had the honor of working with many incredible team members.  George Dover and I started Cascade in 1999 and slowly built a strong foundation. When Wayne Bond, Ryan Stum, and Gerron Dover became our partners in 2006, Cascade began to really grow. Now I look at the talented executive team that we have and more importantly the individual team members at Cascade who work day in and day out serving the American Dream through affordable homeownership and I am humbled and grateful to each of them. Building Cascade shoulder to shoulder with so many great people is my biggest career accomplishment.

I enjoying connecting with other people. I believe that the ability to connect with anyone at any level has allowed me to succeed where I otherwise might not have.

Kenny Shipley and Curt Hodgson turned a startup into the country’s fourth-largest builder of manufactured homes (and tiny homes) with only three factories in Texas and Georgia. The company built its own network of independent retailers, mostly with handshakes and honored promises. With controls on process and design, the company offers more than 80 floorplans from tiny home and one-bedroom, to five-bedroom/multisection homes. The two took the company public in 2019, and have been a darling of the Street trading under LGH with steady early growth and a surprising recovery through the coronavirus economy that included a voluntary early repayment of a $6.5 million government PPP loan that garnered the company further national attention.

George Porter has spent more than 35 years in the manufactured housing industry. In 1990, he formed a training company called Manufactured Housing Resources to teach proper installation practices. Porter’s guidance has been accepted in nearly every U.S. state and is used by most manufacturers of HUD code homes. Porter penned a pair of books on the subject and has written hundreds of articles for industry trade publications. He has presented to more than 10,00 professional installers in the U.S. and Japan. He is the national authority on manufactured home installation and participates in nearly all government programs concerning installation practices.

Several manufactured homes are coming to Washington D.C. not only for professionals and consumers but lawmakers too. This is part of MHI's Homes on...
Load more