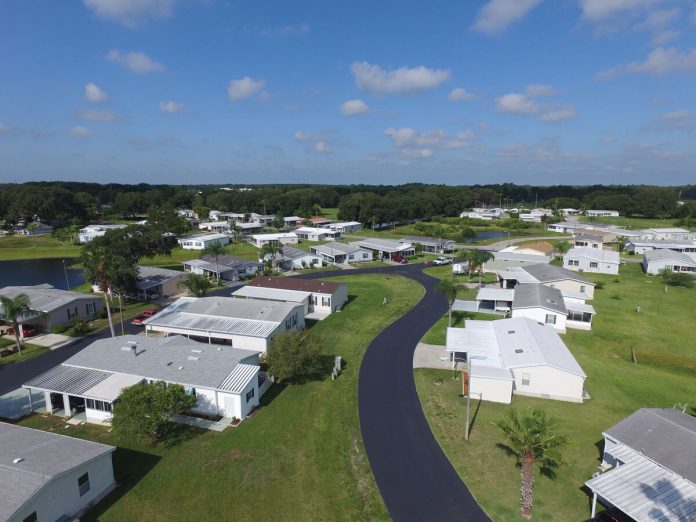 Updates and Industry Happenings from the Manufactured Housing Industry

Green Courte Partners acquired a 20-acre land parcel adjacent to Conestoga, a land-lease community it owns in Gardner, Kansas, a suburb of Kansas City, to develop an added 98 homesites for the community, bringing the property to 757 homesites. Green Courte owns and operates 7,000 homesites nationally. The new section is in development as “Lakeside at Conestoga” and offers a lake, walking paths, and a pavilion, in addition to the clubhouse, pool, playground, and other amenities at Conestoga.

One of the leading employers from Elkhart, Ind., Patrick Industries, will open a new plant in La Porte, Ind., creating about 30 new jobs during the next four years. The 60,000 square-foot-facility in the Thomas Rose Industrial Park will help support its supply and distribution to several industries, including marine, RV, and manufactured housing.

In little more than two months Yale’s real estate division has closed on the sale of nine communities with about 1,300 hundred spaces from the Florida and Georgia, to Missouri and Oregon, with transaction sizes ranging from $2.5 to $61 million. “The geographical and asset diversity of these recent closings emphasizes Yale’s reach and national teams’ position in the market,” Yale founder James Cook said.

Leisure Living Manufactured Housing Community in Fort Worth, Texas, has received a $6.15 million loan through Maverick Commercial Mortgage. Benjamin L. Kadish, president of Maverick, said the 10-year, non-recourse loan has a fixed interest rate, and amortizes over a 30 year schedule. Proceeds from the loan were used to pay off the first mortgage lender, paid for closing costs and returned equity. Leisure Living has 124 homesites, off-street parking, a clubhouse with gathering room, dining area, and kitchen, as well as on-site management, boat / RV storage, and a swimming pool. The second park, in Sequim, Wash., received a $9.8 million loan originated by Maverick that covers about 70% of the development of Lavender Meadows, a new 55+ community with 217 homesites. The initial phase of home installation in planned for fall 2021.

Hometown America refinanced a portfolio of properties consisting of five communities and 1,731 homesites in Massachusetts, New Jersey, Illinois and Florida. PGIM Real Estate provided $178 million in fixed-rate debt for the refinancing of the properties that are 99% occupied, and include amenities such as pools, fitness centers, putting greens, clubhouses, bocce ball courts, and dog parks.

Great Brook Village, a manufactured home community near Tillton, N.H., sold for $4.26 million, a 6.61% cap rate. Will Peck, Dennis Kelleher, John Pentore of Horvath & Tremblay arranged the sale, representing the seller and procuring the buyer. The community has 65 homesites, all occupied by homeowners, on lots for two- and three-bedroom homes. Each home has oil-fired baseboard heat. The property is attached to city  water and sewer billed directly to homeowners and is near outdoor recreation and big box shopping.

Orlando-based real estate investment company Elevation Capital Group has completed the first acquisition with its eighth round of funding. The initial offering amount for Fund 8 was set at $50 million and already has received commitments in excess of $28 million. The  purchase is a manufactured housing community in the Washington, D.C. metropolitan area, and May marked the beginning of monthly distributions for investors in the fund, estimated at 5% monthly. Elevation, through its affiliates, has acquired properties worth more than $600 million and has owned more than 200 assets in more than 30 states.

“The team at Elevation is especially excited to add to our existing footprint in the D.C. metro area,” Ryan Smith, at Elevation Capital Group, said. “We were awarded the deal even though we were not the highest bidder, due to our track record of high-quality management of manufactured housing communities.”

Park Lane Finance Solutions, a regional home-only lender has promoted Luke Foster to vice president. Foster has been an industry champion nearly his entire life, from growing up in the family business, Foster’s Housing, a former North Carolina-based retail chain, to giving time on boards and committees.

“Luke has been an integral part of the success at Park Lane over the last five years,” Park Lane President Rick Cason said. “With his years of experience in the manufactured housing industry, serving in the finance, community, and retail sides of the business, he has developed a unique skill set that enabled Park Lane further its financing programs aimed at helping community retailers fill vacant lots, sell rental inventory, and create affordable home ownership opportunities for individuals and families in communities.”

Sandra L. Thompson has been named the acting director of the Federal Housing Finance Agency. She served as deputy director of the Division of Housing Mission and Goals overseeing housing and regulatory policy, capital policy, financial analysis, fair lending, and mission activities for Fannie Mae, Freddie Mac, and the federal home loan banks.

FHA nominee Julia Gordon continues through confirmation hearings that will determine if she is to oversee the federal manufactured housing program. Gordon is the current president of the National Community Stabilization Trust, a nonprofit organization that promotes neighborhood revitalization and housing affordability. Previously she served as the housing director at the Center for American Progress and managed, the single-family policy team at the FHFA.

Dan Fitzgerald, a general manager for Bonnavilla, a division of Chief Industries, retired in August after exactly 50 years in the manufactured housing business. He started in the industry on Friday, Aug. 13, 1971 and retired on the same day and week of the month in 2021.

First Community Mortgage of Johnson City, Tenn., has launched HOLACASA, a home opportunity loan program breaking down barriers to homeownership for Hispanic homebuyers and homeowners. The program is open to foreign nationals and non-resident immigrant status with ITIN/W7 U.S. tax return filings; applicants must have filed taxes in the U.S. for the previous year. The loans may be used for primary residence, second home and investment properties, and are also available for non-warrantable condos, manufactured homes, 1–4-unit properties, townhomes/PUDs and vacant land. Loans up to $6 million. The HOLACASA website includes other facts, opportunities and guidelines.

“This is the branding and consolidation of the many initiatives we offer for the Hispanic and Latin communities,”  FCM Executive Vice President of Multicultural Business Development and Chief Diversity Officer Miguel Vega said. “We wanted to wrap everything we’ve been doing under an official name as we continue to refine and expand the initiative.”

Thomas Webb of Lake Delton, Wisc., passed away at the age of 75. Born in Baldwin, Wisc., Mr. Webb grew up on a farm and graduated from UW-River Falls with a degree in agricultural business. He had a passion for business and commitment to hard work, he loved the challenge of seeing his endeavors. When his day job on the farm or at the credit union was complete, he gave assistance to help maintain the mobile home park where he lived. He took the opportunity to buy the modest property and acquired adjacent parcels to establish Red’s Mobile Home Park, in Lake Delton. He, his wife Gail, and their twin sons Jeff and John started Deer Run Mobile Home Estates as well.

One Historic Night at the Hall