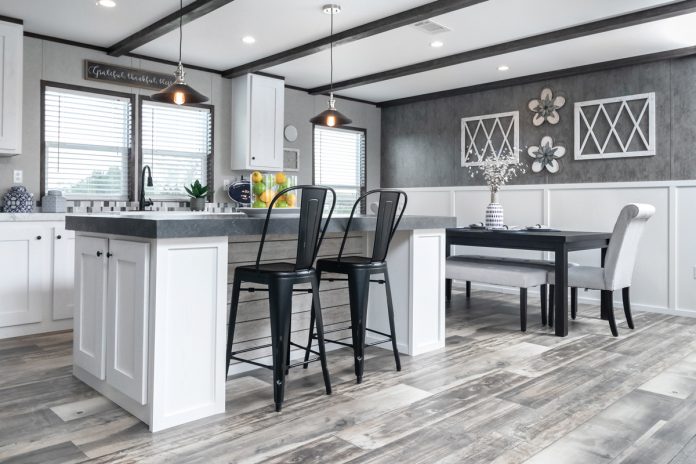 Jessup Housing set up a nicely branded and comfortable networking lounge at a hotel and conference center for the Texas Manufactured Housing Association annual meeting. The space served as a prearranged spot for Jessup employees, clients, and partners.

Scott Cannon, the company’s vice president of sales, sits forward on one of the many bench-style sofas in the networking lounge and talks about the origins of Jessup, its roots and culture, and the homes it builds for customers in nine states.

“Every person in the business builds as if we’re building for our own family,” Cannon said. “Each home is like a new baby.”

In barely four years, Jessup Housing, out of Waco, Texas, has become a destination employer and a vital housing provider in the central and western U.S.

The company was started by David and April Jessup with a small group of investors at the end of 2017, leveraging the industry veterans’ 50-plus years of experience with multiple builders. Together, they selected a location to build homes and pulled in a team to make it happen.

Cannon came aboard in May 2018. Casey Peacock and his sister-in-law, Meghan Roller, joined the team having been running a collection of manufactured home dealerships, Hench’s Homes, in central Texas. Lance Inderman was “the land guy”.  Donnie and Jack Brewer, signed on with dealerships in North Louisiana, and Todd and Marvin McDonald rounded things out with dealerships in Jasper, Texas.  Finally, April Jessup was set to draft and design homes, manage payables and receivables, and order materials.

But first, they needed a new facility.

Jessup I in Waco

“David leased the old plant, a shell really, with no planks and no cover and no plumbing or wiring or anything else,” Cannon said. “The shell of the building was there, but really nothing else.”

They had the advisers in place and hired contractors to build out a factory to manufacture homes the way Jessup intended. The Jessup team held a job fair at the factory and 381 people showed up. They were overwhelmed with the response. They hired 80 people the first week and have been ramping up a bit more every quarter.

“It’s a modern plant in an old shell,” Casey Peacock said. “We put a lot of money in on the front end to save on the backend, and it’s worked.”

Like its production space, the leadership team for Jessup requires each home to have an added element of integrity that will serve the homebuyer well. They use cross members throughout, state-of-the-art plumbing systems, enhanced insulation, and a number of other measures to build the best possible home in each price point.

The company has worked hard, Cannon said, to organize a package of floor plans and homes built to satisfy 80% of Jessup’s market.

“We want to be the best builder on the planet,” Cannon said. “This is all above and beyond what HUD code requires…We to do it The Jessup Way.”

Start Simple, Do It Well

Jessup spent most of 2018 getting the home building facility, the key players, and the partnership worked out. They built oil field units to get the factory ramped up and systems in place. In 2019 the company began building a multi-section home to bolster its lineup of single-section floorplans. In July of 2019, Rick Michalak rounded out the team, with 35 years of management experience, as vice president of production.

“We were able to increase our production 25% in a relatively short period of time,” Casey Peacock said.

“We show up each day at 6 – 6:30 so we can be there to shake each employee’s hand each day to thank them for being there with us.”

It wasn’t long before Jessup was producing 30-35 homes each week. When a need for expansion arose, the company expanded into an adjacent facility on the same site.

In July of this year, Jessup acquired its second plant in Waco, and production continues to ramp up at “Jessup II”.  Now with more than 300 employees between the sites, its central Texas workforce is poised to optimize production towards 50 floors per week.

“We’re just ramping up,” Peacock said. “We are adamant about avoiding overtime, to manage labor expenses while providing our team members with work-life balance. We’re getting into a rhythm, and that’s what you want. That’s how we’re going to consistently get 45-50 floors a week.”