SB 375 on Transferable Registration Tags Spearheaded by Adventure Homes to Ease Cost for Builders, Retailers and Customers in Delivery of Modular Homes

This week Indiana Gov. Eric Holcomb signed SB 375, which eliminates the requirement for permanent tags on carriers that transport modular homes to customers. The switch to a transferable tag program and recyclable carriers will save money for builders, retailers and customers. 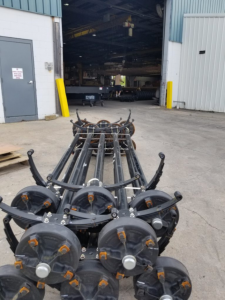 The new Indiana state law will go into effect on July 1.

Indiana is a national leader in modular housing and other forms of factory built homes. State code modular manufacturers with the new law will be able to maintain a lower cost disposable “MOD carrier” program.

“A permanent carrier fleet is extremely expensive for the housing manufacturer, the retailer/site builder and ultimately the consumer,” Adventure Homes General Manager Rich Rice said. “It is also a logistical nightmare to manage the returnable carriers.”

A disposable carrier is a lightweight and less expensive carrier designed to ship one specific home to a destination. The number of axles and axle location varies based on the requirements for the specified home. The change can help right-size the cost of delivery.

In general, the cost with the new method is several thousand dollars less than that associated with the heavy duty reusable carriers, which have been the industry standard.

The mod/site builder receiving the home on a disposable carrier removes the home and can recycle the carriers including axles, hubs and tires. With rising price of steel, recycling can be quite profitable.

Overall, the new transportation process creates an actual savings that is passed to the consumer.

So, rather than paying as much as $2,000 to return a carrier, the customer merely returns the license plates for between $10-15 in shipping.

The new Indiana law allows a modular manufacturer in Indiana to purchase sets of registration tags. The reusable tags can be put on any carrier in the new recyclable fleet. And carriers no longer need to be titled, eliminating the need for re-titling required under existing law.

As a result, manufacturers merely need to maintain record of the serial number for a home that was used in connection with registration plates as a measure to track registrations in the field.

Registrations sets are renewed annually at the rate required by the state for that year.

How the Transferable Registration Tags Made It to State Law

Adventure Homes approached Indiana Manufactured Housing Association Executive Director Ron Breymier about the concept of transferable registration tags. Rice and Breymier contacted the Indiana Department of Transportation and the state Bureau of Motor Vehicles about the idea. Following two years of discussion, meetings with agency management and attorneys, it was determined that existing law would prevent initiation of the concept.

“We set our sights in a new direction and turned to the State Legislature to create new law,” Rice said. “Sen. Blake Doriot authored and sponsored the initial Senate Bill 375. Sen. Doriat was able to get a hearing with the Senate Transportation Committee.”

Again, Rice testified for the committee and chairman Sen. Mike Crider brought the issue to a vote, which passed unanimously. In the state House Rep. Doug Miller championed SB 375, signing the bill and facilitating a House Committee hearing.

“I was able to testify again in front of the house committee, and again, the measure was passed unanimously,” Rice said. “With this much momentum we felt very good that it would be passed by the full House and Senate and it was.”