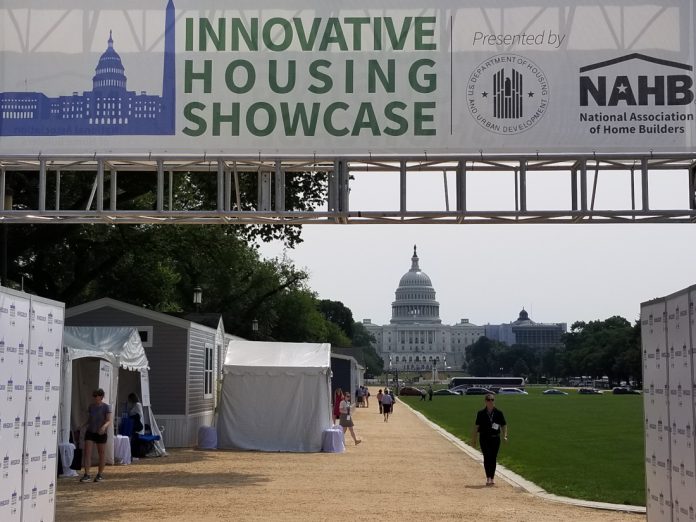 The favorable reception to manufactured homes and other housing solutions on exhibit during the inaugural Innovative Housing Showcase on the National Mall in Washington, D.C., means the showcase probably will become an annual event.

“I think we probably will be looking to do it again next year,” HUD Secretary Ben Carson said during a June 3 one-on-one interview with MHInsider magazine. “We probably will have a lot more people who want to be exhibitors, but we’ll have to keep it under control.”

The June 1-5 event coincided with and kicked off National Homeownership Month in Washington, D.C.

“You already look at the building costs, which are 30 to 40 percent less (than site-built construction), I mean this is almost an irresistible solution. You just have to get some of the regulatory barriers out of the way,” Carson said.

MHI worked with manufacturers and community owners across the country to provide the resources and access that allowed the homes to be delivered and set up on the northwest section of the National Mall.

Skyline Champion Corp., the largest publicly traded manufacturer of homes in the nation, had a pair of homes on the mall. Another large builder, Cavco Industries, worked with home retailer and community owner UMH Properties to show the third home.

As much as the Innovative Housing Showcase was a success, it was proposed in late spring and required quick work, a creative approach and diligent attention from MHI, the builders and community owners who participated.

“I was thrilled that there were so many people who were interested in this, particularly given the limited scope of advertising that was done,” Carson said.

“But that’s one of the reasons we wanted to be right here on the National Mall,” he said. “It’s its own kind of natural advertising. People are going to be walking through here all the time. Also, putting it right in view of the Capitol. Because we want the legislators to understand… we’re talking about advanced technology that really makes affordable housing a possibility. And we need to start thinking about things in a different way to solve some significant problems.”

‘We Need to Advance the Ball’

Carson said MHCC sent a revised list to HUD staff, and progress is being made.

“We’ve hired a number of more people in the manufactured housing arena, just so they can deal with it,” Carson said. “The way it’s been in recent years, we’ve had just enough people to tread water. And we need to advance the ball. We’ve made that a priority.”

HUD already has notified home installers, community owners and homeowners that it will not enforce previously enacted frost-free foundation rules, and in May rescinded the “Carport letters” that had required secondary approval and inspection for carport-ready homes, a popular feature among homebuyers.

“There’s a lot more that needs to be done,” Carson said. “Basically, we have a regulatory office (specifically for manufactured housing) now, and they’re going through all of the different segments of HUD and looking at the list that has been provided for manufactured housing. “There’s about 18 things, and we’re just ticking them off one by one,” he said. “So, it’s really only been within the last six months that we’ve really had the personnel that can get things done.”

A New Direction for Housing Programs?

When asked about his objectives for HUD within the next couple of years, Secretary Carson said he envisions enormous change.

“What I want to see is our agency, HUD, turn into an agency that really focuses on how to get people out of dependency,” he said. “In the past, we’ve been more interested in how many people we shelter, how many we have in this program or that program. It really should be just the opposite… how many people get out of this program. How many people can you get to a point of self-sufficiency.”

One of the prime benefits of manufactured homes is that they represent attainable housing. A primary contributor to that attainability is the fact that manufactured housing is the largest form of non-subsidized affordable homeownership.

“So that’s a 40-fold difference,” Carson said.  “And it’s a major driver of self-sufficiency.

“We also need people to start recognizing that… and I’m talking principally about millennials, you don’t have to start out with a 4,000-square-foot, site-built home,” he said. “Now, in order to start building your equity, you can start out with something much smaller. But it doesn’t need to be small and horrible. It can be small and nice.”

New homebuyers should be encouraged by a 2018 pilot report within the quarterly Housing Price Index, issued by the Federal Housing Finance Agency, that indicates manufactured homes appreciate in value similarly to site-built homes, Carson said.

“So as soon as you buy that house, you can start accumulating some wealth,” he said.

The Promise of Manufactured Housing

More than 5,000 people, many who had never stepped foot in a manufactured home, or perhaps had misconceptions about homes built in a factory, toured the new manufactured homes on the National Mall during the event.

Steve Quick of Cavco Industries spent the first two days of the showcase in the home from UMH Properties. One word, Quick said, continued to ring out among the many exclamations of amazement he heard. That word was, “WOW”.

“It’s been very busy, and the response we’ve been getting has been exceptional,” Quick said. “This is a tremendous stage for us to be able to show what we can do.”

“That’s one of the real purposes, is to sort of burst misconceptions about what manufactured housing is and what it can be,” he said. “And, of course, there are multitudinous models available to people. There are smaller models and there are bigger models. And you can match the façade to almost any neighborhood.”