The opening day of IBS in Las Vegas proved to be a historic day for manufactured housing. And it’s one that throngs of builders, developers and other housing professionals are enjoying.

The company and its partner in ADU construction, URBANEER, are greeting thousands of curious and inspired building professionals in their recently reintroduced line of Genesis Homes.

“We had people showing up before 8 a.m. today before the show even opened. We weren’t turning them away,” URBANEER’s Chris Moore said. “We’ve had developers in asking questions… how many modules does it come in, can I get it with the kitchen appliances, that type of thing.”

With about 100 floor plans per plant, and homes that can be built to manufactured or modular specifications, the answer typically is “yes”.

The Sequoia on display comes from a plant in Chandler, Ariz. However, the Genesis models are available nationwide. The three-bedroom, two-bath house has 1,459 square feet of living space. It has an attached garage, a premium kitchen with stainless steel appliances, large windows, and energy-efficient features. 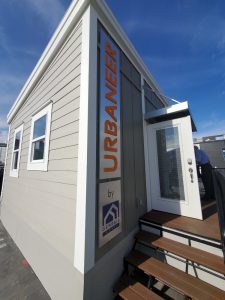 A new decking system from Oliver Technologies connects the model home in Las Vegas with the Genesis 510, an accessory dwelling unit that can be placed in the backyards of existing homes. The Genesis 510 comes from a home building facility in Corona, Calif.

“It’s a tremendous opportunity for us to be here, get this type of exposure, and show a great number of people what we can do,” said Wade Lyall, executive vice president of business development for Skyline Champion. “The response has been tremendous. It’s day one of the show and I feel like we’re really turning some heads already.”

About 100,000 people will attend IBS. The Las Vegas Convention Center has four floors in three wings filled with everything from engineered lumber to designer bathtubs. It is among the largest trade shows in the country, akin to the Consumer Electronics Show.

Bruce Dowling of Bayview Homes in Annapolis, Md., came to the show for many reasons. But he was intent on visiting the off-site built homes in the outdoor Village at the convention center.

“On the eastern shore of Maryland, there’s a lot of modular construction going in, and there’s plenty of room on those parcels to bring in a smaller second home for the backyard,” he said. “We build custom homes in the area, and this is a really good option for some of our customers.”

Many housing markets across the U.S. cannot meet demand. This is especially true for homes priced in the middle of the market. Factory-built homes can meet the demand for quality and affordability. And the inclusion of Genesis Homes at IBS 2020 is yet another signal that the market is warming to the efficiencies of off-site construction.