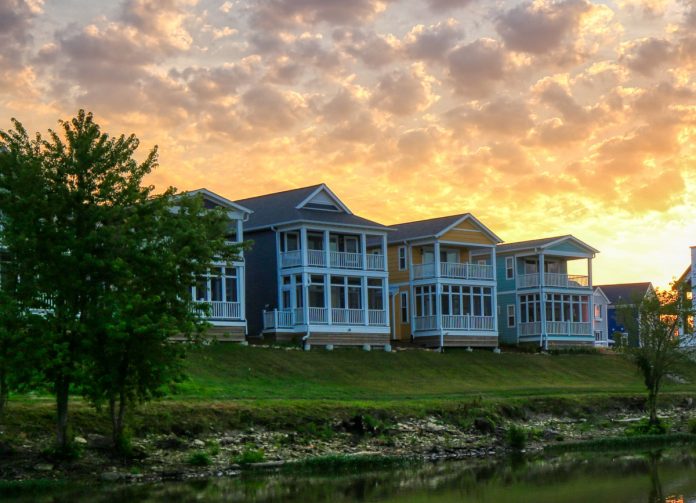 Ninety miles southwest of downtown Chicago, Heritage Harbor is anchored by a 32-acre harbor, made from a former shale quarry opened to the Illinois River, protected by a resplendent stone seawall.

For the boaters of the world, this is the first stop on the Great Loop out of Chicago. Boaters can navigate Lake Michigan and access the great Mississippi, the Saint Lawrence Seaway and the Atlantic Intracoastal Waterway, as well as points south to the Gulf of Mexico.

As you approach the resort, the hills of the river valley provide a beautiful backdrop to the homes and commercial structures that surround the marina. Just minutes from Ottawa, a town of 20,000 residents, the resort is adjacent a canal system once responsible for transportation of vital cargo from Chicago south. While the canal is long gone, the tow path remains part of a 60-mile walking trail.

Heritage Harbor is the vision of Tom Heimsoth, a former tech executive who sold his company and chose to develop this special master-planned resort community. His passion is evident in both the scale of the project and the work that he has done in the area to promote tourism.

As a former tech innovator, I appreciate the tangibility of developing the built environment versus software. Lines of code can be overwritten in seconds but moving dirt somewhat resembles permanence.

Touring the property, among the initial observations was the indistinguishability between the 130 homes, from site-built to factory-built. Forty-five of the homes were made by one of two modular builders, Homeway and Ritzcraft, and the other 85 were constructed on-site. Tom and the development team, led by Kevin Donovan, understand that building off-site is the future. They are working hard to secure a supply chain that can help complete the additional 550 homes that have been approved by the municipality.

The benefits of producing manufactured and modular homes off site centers on predictability — timing, cost, and quality. As their sales waiting list grows it is important to deliver units that can be quickly occupied by owners, or as part of a growing rental business managed by the resort. Offsite manufacturing also offers an opportunity to pre-engineer interiors to provide a higher level of quality and ultimately a better occupant experience.

Tom and his team have anticipated the changing demographics of potential residents and visitors. Households today represent bookends: One in five households now living solo and one in five are multi-generational. The master plan for Heritage Harbor calls for a mix of units ranging in size from 400 square feet to large custom homesites to accommodate these trends.

The housing types under development will appeal to both boaters and Chicago residents who are looking for a quick escape. In addition, there are plans for an active adult community to be operated by a third-party management team.

With 10,000 people turning 65 each day in the U.S., Baby Boomer Chicagoans and others are looking to downsize from their large suburban homes. Heritage Harbor’s location provides a destination that is a world away yet still accessible to big city healthcare and other amenities.

Nearby, Ottawa is a year-round community with a great food and brewery scene and local businesses that represent a level of authenticity that is appealing to many visitors. Located just off I-80 it is easy to access, but at the same time feels removed from the hustle of Chicagoland.

As COVID0-19 continues to transform how we live, how we work and play, Heritage Harbor stands to gain more attention, and new residents.

More than 14 million people relocated by mid-2020 due to the increased ability to learn and work remotely, according to USPS data. While some behaviors will revert back, it is evident that new patterns will endure and transform the real estate market.

Heritage Harbor, in its way, is the convergence of the past and future.

The canal system that took 30 years to build operated for 30 more years before rail transportation provided the more efficient way. It is a good reminder that even innovation in the built environment can be fleeting. Today, Heritage Harbor is a node on a new network that supports remote work, learning, and telehealth  — a way to both connect and disconnect — with a front seat view for the evolution of construction.