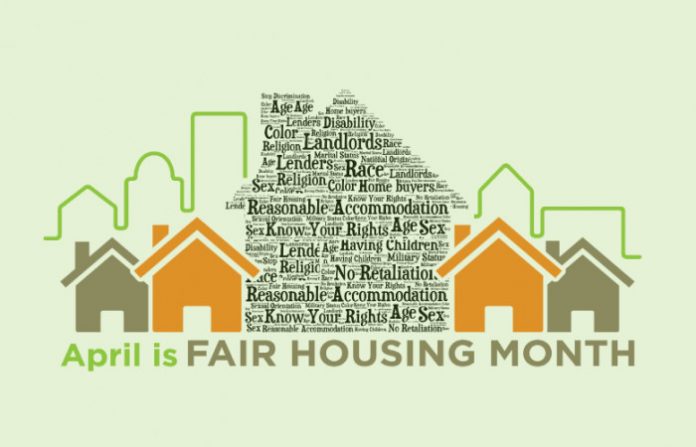 The month of April is designated by the U.S. Department of Housing and Urban Development as Fair Housing Month, with the 2021 theme “Fair Housing: More Than Just Words”. HUD Secretary Marcia Fudge said the theme reflects the Biden-Harris Administration’s commitment to advancing equity in housing and the importance of increasing public awareness of everyone’s right to fair housing.

“Fair Housing Month is a time to recommit to our nation’s obligation to ensure that everyone has equal access to safe, affordable housing,” Fudge said.

Fudge said the mission continues to guard against housing discrimination in the form of individuals and families being denied a place to call home because of the color of their skin or where they come from, landlords refusing to allow persons with disabilities to keep assistance animals, individuals being denied a place to live because of who they love.

“In this moment of unprecedented crisis, fair housing is more important than ever,” Fudge said. “Fifty-three years after the Fair Housing Act was signed, our journey to justice in housing continues.”

Each April, HUD, local communities, fair housing advocates, and fair housing organizations across the country commemorate Fair Housing Month by hosting an array of activities that highlight these ever-important and continued efforts.

The month is used to provide a dedicated time in which housing professionals, advocates, and activists can collaborate to enhance the awareness and understanding of fair housing rights and to end housing discrimination.

Last year, HUD and its Fair Housing Assistance Program partner agencies received more than 7,700 complaints alleging discrimination based on one or more of the Fair Housing Act’s seven protected classes: race, color, national origin, religion, sex, family status, and disability. During that period, the categories with the highest number of complaints were disability and race, respectively. HUD also received complaints that alleged lending discrimination as well as numerous complaints from women who faced unfair treatment, including sexual harassment.

“Although the Fair Housing Act became law in 1968, we still have major challenges ahead of us,” said Jeanine Worden, HUD’s acting assistant secretary for fair housing and equal opportunity. “This April, on the 53rd anniversary of the Fair Housing Act, HUD is renewing its commitment to level the playing field so every person has the same opportunity to live where they choose and benefit from all of the opportunities this nation offers.”

Learning from the History of the Homeownership Rate