In recent years traveling the country, discussion with innovators and leaders in the housing industry led to a realization of one of the most interesting developments we’ve witnessed recently in residential housing.

The accessory dwelling unit, or ADU, is one of the fastest-growing housing types in the country.

As cities across the country revise zoning to allow for the addition of backyard housing, there is a growing interest for the ADU to be a key piece of the solution for the U.S. housing crisis.

In mid-2018, Jonathan Lawless, vice president for product development and affordable housing at Fannie Mae, pointed to “the perfect storm” at the center of the housing shortage. Lawless said a great deal of the pressure comes from Boomers staying in their homes longer than anticipated, which creates a lack of inventory for first-time homebuyers, many of whom already are hamstrung by college debt, for instance.

The problem was being further compounded in urban areas, particularly on the coasts, that have existing high-density neighborhoods where adding new units is extremely difficult.

While there won’t be a single solution to the housing crisis, Lawless stressed that ADUs placed in the backyards of single-family homes where land was essentially free could play a key role in helping to relieve the housing shortage.

Fast forward to 2020 and the Rise of ADUs

Municipalities across the country are embracing ADUs. Zoning has been revised in many locations to allow the diminutive structures to be more easily built and placed. California has gone so far as to pass state-wide zoning that allows for ADUs. This, theoretically, opens up nine million backyards to new housing units that can be as large as 1,200 square feet in living space.

During a three-month stay in the Bay Area this spring, my wife Brenda and I met with San Mateo County officials who are “rolling out the red carpet” for homeowners interested in ADUs. Silicon Valley is the epicenter of the U.S. housing crisis, with the spike in rental rates at an unsustainable pace. San Mateo County alone added 80,000 jobs since 2011, yet has only 11,000 new housing units during that time.

At a small seminar on ADUs, the county provided a workbook for residents looking for guidance on building a backyard ADU. Event attendance was far beyond what was anticipated, and it was fascinating to learn that the small city of Hillsboro on Feb. 15 had already received 50 building permit applications and that 45% of those were for residents interested in building an ADU. More than once there was the mention of a “civic duty” to provide more housing, with a mind toward the plight of teachers, first responders, healthcare professionals, and other essential workers who many times cannot afford to live in the area they serve.

In a region where some workers commute as many as three hours a day, ADUs can play a key role in helping to alleviate the housing shortage where workers are needed. A number of municipalities in California, — including San Diego, L.A., and Santa Clara, — are allowing mobile ADUs, which can be a tiny home on wheels, or a park model RV. For a state that is targeting 3.5 million new housing units by 2025, it needs every option available. And allowing temporary units could be a game-changer for remote workers and those who look to age-in-place.

The History of Accessory Structures

Although ADUs might be viewed as a new housing type, historically they were common until the mid-’50s when many municipalities banned new units and allowed existing units to remain. The notion of ADU actually dates back to Colonial times when smaller homes were built as temporary homes while larger residences were constructed. Until the advent of zoning ordinances in the early 20th century, landowners could have as many dwellings on their property as they desired.

ADUs have fallen into several categories of housing, and have been called granny flats or in-law apartments. These included detached units as a stand-alone home or interior “apartments” in single-family homes. Often the interior quarters have been in a basement or above a garage. Each type continues to be created today, but the detached unit is the fastest growing. Terms for the stand-alone structure range from junior accessory dwelling, or JADU, or DADU for detached ADU.

It is estimated that 3,500 ADUs were grandfathered in Chicago when the zoning changed. It also is estimated that there are 50,000 illegal ADUs in Los Angeles that now may be eligible for amnesty subject to inspection under the new ADU program.

A recent study by Freddie Mac asserts that there are 1.4 million unique properties with ADUs in the U.S. The research shows an increase in first-time ADU listings at an average annual rate of 8.6%. In 2019, 78,00 ADUs were either sold or rented, up from 36,000 ten years prior, with southern and western regions of the country leading the way.

Uses for ADUs range from rental income for the owner of a primary residence to a place for a loved one to live independently in a nearby location. However, a majority of ADUs today are being deployed as a means of easing housing affordability. Some home builders, such as Classic Cottages in Alexandria, Va., are setting up separate business entities to pursue the ADU market both for new builds and as an addition to an existing home. 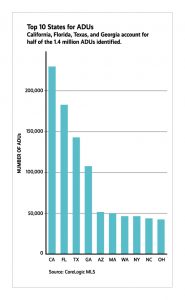 Backyard Cottages launched last year and in August the principals laid out their plans for diversification. The company already has several site-built units and have just taken delivery of their first modular unit built by Skyline Champion Corporation in its Strattanville, Pa, homebuilding facility.

Classic Cottages envisions ADUs that will help the Millennial buyer qualify for a mortgage, given the income potential of up to $2,500 per month for a backyard rental in the D.C. area. And all of this can be done with relative ease. For new homes, it is one permit, the build, and one finance application.

With up to 10,000 Baby Boomers turning 65 every day in the U.S., ADUs provide a great solution for aging-in-place. And, given the fallout from COVID-19 in senior living facilities, there is ever more demand across the U.S. for ADUs as a standalone transitional housing option.

“We see the lifestyle changes associated with the COVID-19 pandemic only accelerating the growth potential of ADUs in our local D.C. market over the next 3 to 5 years,” Backyard Cottages CEO Pierce Tracy said. “The rental value proposition in this area was already very strong and remains. However, the family need side has seen a rise as separate spaces on one lot for multigenerational households are at a premium. Building a backyard cottage allows you to keep an aging parent close, but not too close.”

Check MHInsider for all of your manufactured housing news and updates, including a sidebar story about how UMH Properties uses ADUs to provide its new Care Cottages.