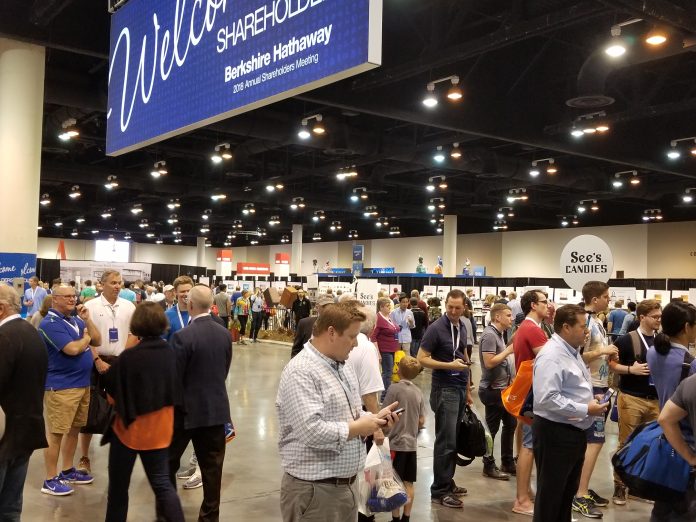 OK, I’ll admit it, I was pretty excited when Clayton Homes reached out and offered an invite and press credentials to the annual Berkshire Hathaway Investors Meeting.

Now, I’ve been to my fair share of investors meetings. They’re typically quite staid affairs, attended by the larger institutional investors, a few reporters milling around and listening in. There are hand-bite sandwiches and some soda on ice.

On the other hand, the Berkshire Hathaway Investors Meeting is attended by more than 50,000 people. Little Omaha, Nebraska, for a few days in the spring feels like the center of the universe. 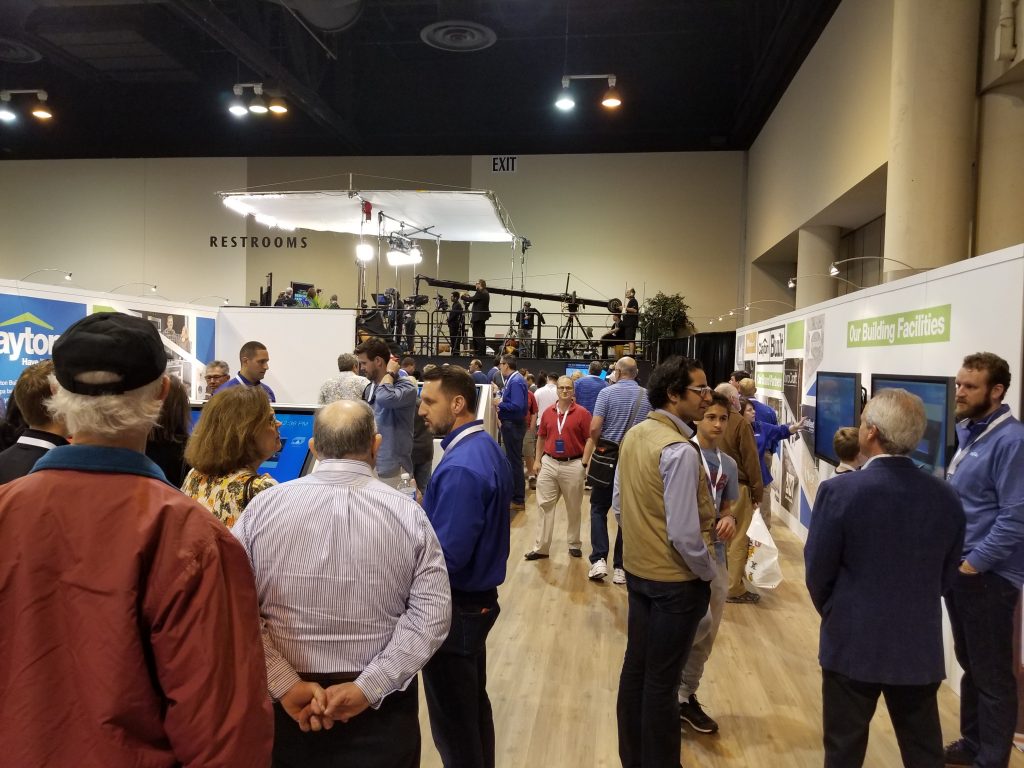 When I contacted the Clayton Homes’ Media Relations Coordinator Ryan Wilson to ask where I might find him once I entered the CenturyLink center, his response set the tone.

“Well,” he said. “This may sound odd, but there’s this giant pickle hanging from the ceiling. If you walk toward that and kind of move along the back wall to the right, you’ll find our area right next to the Yahoo! Finance broadcast stage.”

The giant pickle hanging from the ceiling, of course, was branded with Heinz, a Berkshire Hathaway company. Dozens of other companies owned by Berkshire are represented, too, set up in trade show style but with a retail bent.

Who Comes to the Berkshire Hathaway, What They Find

Investors, even those who own only a single share, can get up to four tickets for the event. They come in droves to purchase specialty products from some of Berkshire Hathaway’s most notable companies… Warren Buffett and Charlie Munger rubber duckies from Oriental Trading Company? A leather shoe from HH Brown that bears a stamp of Buffett’s face? Justin boots; “Walk a mile in Buffett’s boots”. See’s candies. Borsheims fine jewelry. A Dairy Queen dipper. Coca Cola. A set of Fruit of the Looms? 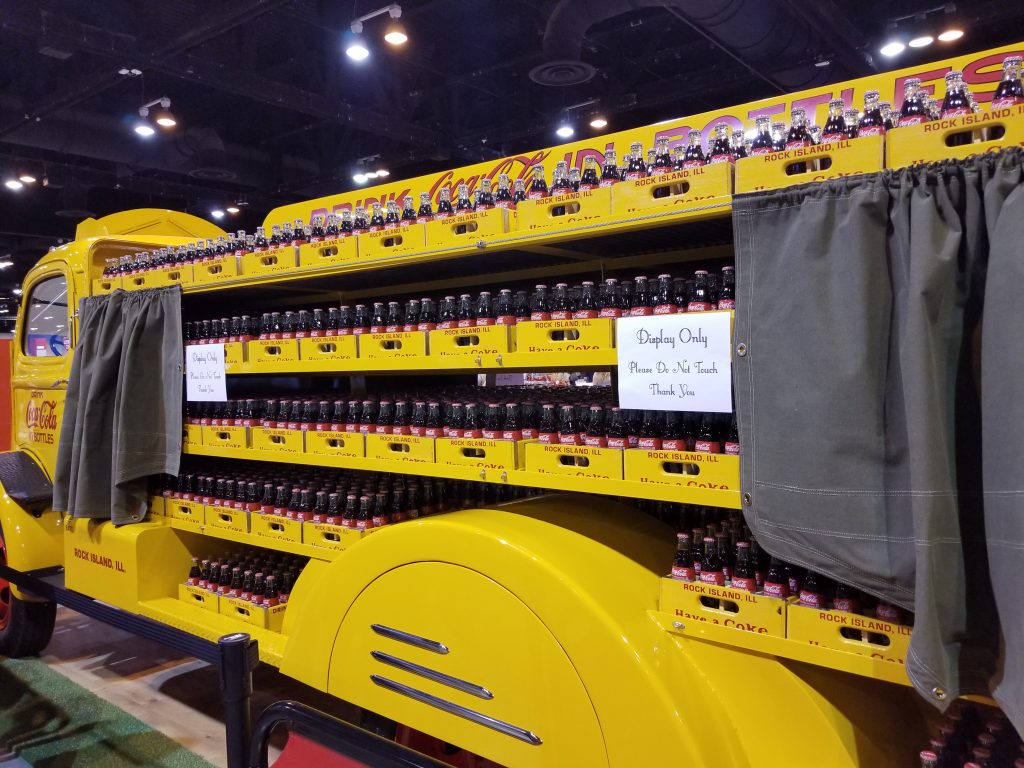 As I walked the exhibition floor where everything is for sale it occurred to me that much of Berkshire Hathaway’s holdings are street level Americana. Wholesome, well understood and established brands with rich history and a wide following.

To that end, Warren Buffett himself is the prime product and service investors and fans come to see. Wholesome, well understood an established brand with rich history and a wide following. All true for the man himself, as well as the brands he seeks and supports.

Bill Tsai, a student of finance at NYU, traveled from the big city to Omaha for a weekend most students would rather be spending at a coastal hideaway.

“We’re in the investing club, and we manage some Berkshire Hathaway shares in our portfolio, and we couldn’t think of a better way to spend the weekend,” Tsai confessed. “One of my friends said ‘This is the rock concert for capitalism’.”

“I’ve been really impressed with the interactions I’ve had here,” he said. “We’re trying to have as many conversations as we can about why people are here and what they do… What it comes down to is people really respect and have a great love for Warren and Charlie and the Berkshire Hathaway approach.” 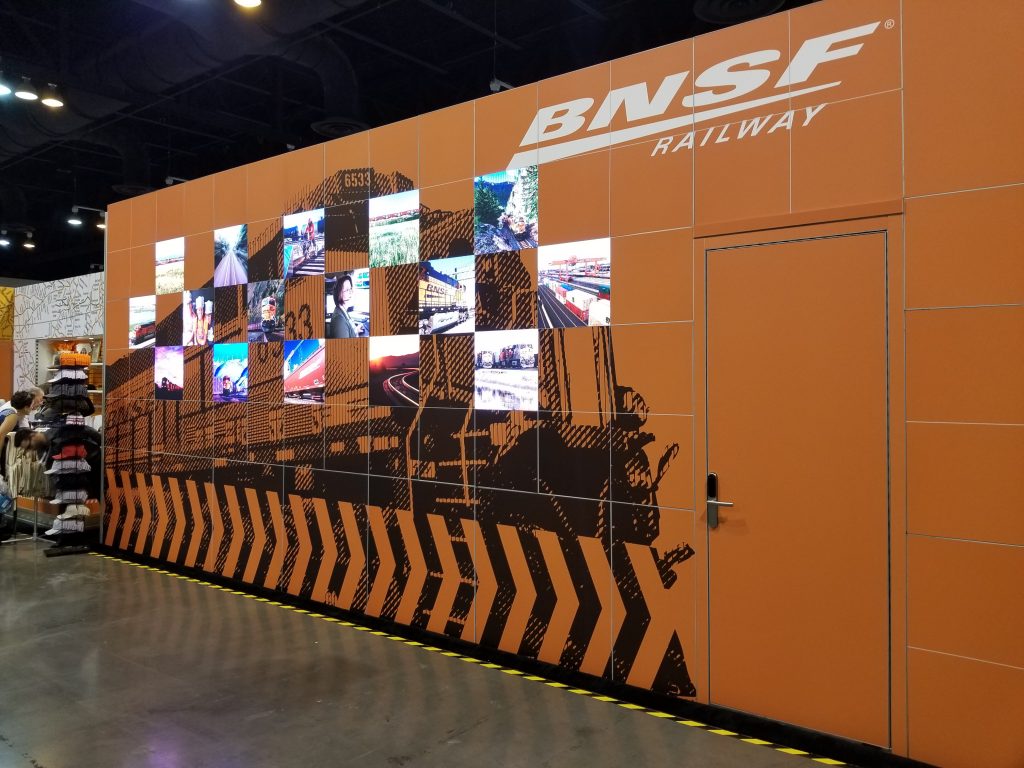 The “Berkshire Hathaway Approach” Tsai speaks to easily can be summed up as one that involves identifying and investing in strong companies in a way that allows the holding company to let owners and managers continue operating as they have, but perhaps with added resources, not the least of which is cash. And lots of it. As a measure, the BRK-B shares have been hovering around $200 per in recent weeks. The BRK-A share hovers around $300,000… per share.

Kevin Clayton, the CEO of Clayton Homes, a Berkshire Hathaway company for 15 years now, said beyond the cash, a primary resource for his company is Buffett’s thoughtfulness, his even demeanor, and his willingness to participate as company owners and managers see most fit.

The 40,000 people who fill the CenturyLink arena abide. They begin lining up at 4 a.m. on a Saturday to watch a film that provides insight to the values and culture of Berkshire Hathaway. It’s first come, first serve. And every seat is filled. People are leaning in the entry aisles to catch a glimpse. The concourses are filled with people from across the globe who stand in the arena to watch a closed-circuit broadcast of what’s to come.

What is to come is Warren and Munger. Eighty-seven and 94-year-old billionaire investors who will sit on stage sipping soda and snacking on salty bites for nearly seven hours with but one break from investor questions. They answer every one of them, and many of those answers elicit full-belly laughs from the throngs of fans. Not just investors. Fans.

It’s that kind of show.

Buffett and Munger opened the conversation with an illustration of why investors should look to performing assets, keying in on 300 ounces of gold since March 1942 appreciating from $10,000 to shy of $400,000. That same $10,000 put into what is today’s S&P 500 would be worth better than $51 million.

“Hold a piece of American business,” Warren Buffett said. “And never look at another stock quote… Never listen to another person give you advice… You wouldn’t’ have to understand accounting. You wouldn’t have to look at your quotations every day.

“All you had to do is figure that American was going to do well over time,” he said. “If America did well, American business would do well… You basically just had to make one investment decision in your life.” 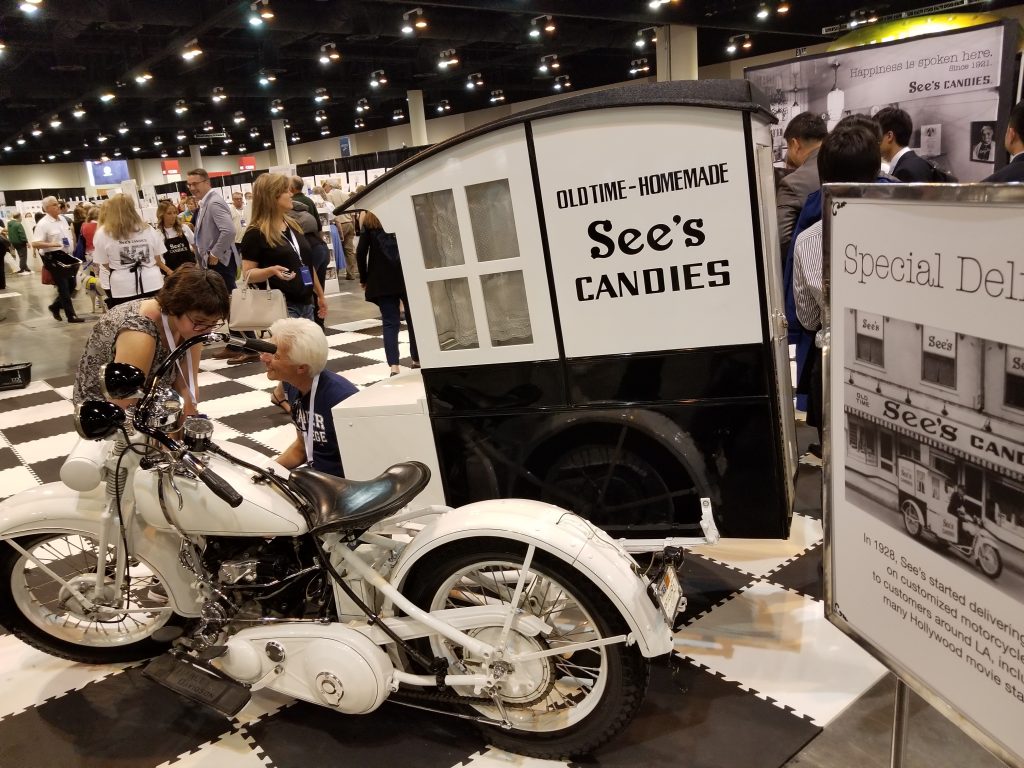 The first question of the day, from William Anderson of Salem, Ore., asked Warren about his handing over manager oversight to Ajit Jain and Greg Abel, as well as a significant portions of capital allocation to Ted Weschler and Todd Combs. “Does all of this mean you’re semi-retired?”

“I’ve been semi-retired for decades,” he quipped up front. “Ted and Todd each manage about $12 and $13 billion… and they’re doing a very good job. I still have the responsibility, basically, for the other $300 billion.”

Another investor asked about how tumult between the White House and China regarding trade balance may upend international dealings.

“The U.S. and China are going to be the two superpowers of the world, economic and in other ways for a long, long, long time,” he responded. “We have a lot of common interests and like any two big economic entities, there are times when there will be tensions, but it is a win-win situation.”

And with a note on the lucky number 8, and that he will be 88 years old in August, the eighth month in a year ending in 8, the “Oracle of Omaha” even appears open to taking investor tips.

“If you find anything over there for me,” he said about China.  “This is the time we should be acquiring something.”

From another questioner, the Berkshire Hathaway duo was asked about crypto-currencies such as bitcoin. Munger intoned first, and clearly is not a fan. He likened crypto to, well, human waste…

“It’s like somebody else is trading turds and you decide you can’t be left out,” Munger said.

Buffett conveyed his appreciation for the fact that many global listeners might be spared of the commentary through, hopefully, a failure to translate. 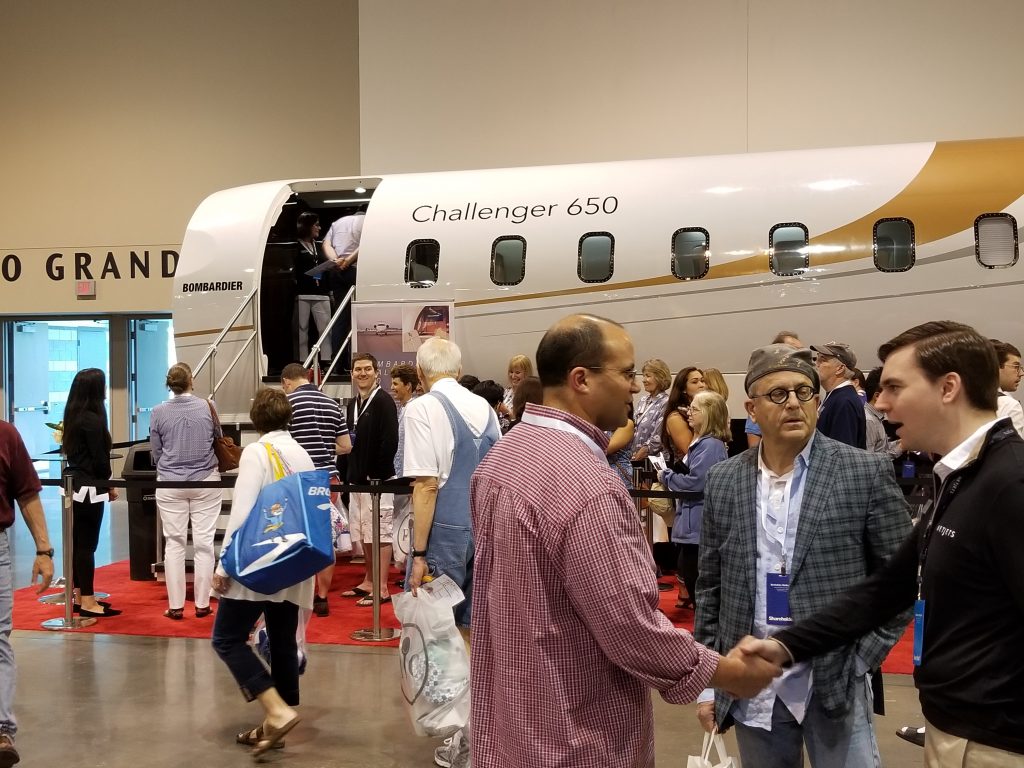 What these two savvy investors have done for the average person who becomes aware of them is impressive, and during this weekend in Omaha seems entirely encompassing.

I was headed back to the airport Sunday morning for what would be the return half of my wildly inflated domestic flight.  Yes, I easily could have flown to Bangkok for this amount. I was on my way out from my $300 per night chain hotel a marathon away from CenturyLink, in an Uber driven by Jason, a retired soldier and inspiring investor.

“My goal this weekend,” Jason said. “My goal this weekend is to make $1,000, and I will drive until I get there. I figure I’m picking up all these people who came here for Berkshire, and I can get some tips and invest that money in the market. Right now I’m thinking GE…”