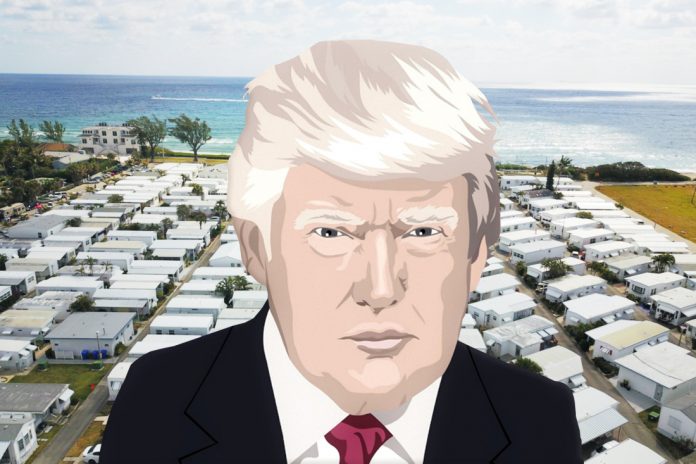 Right before Christmas, there was some buzz within Briny Breezes, a private manufactured home community with 411 residents. Real estate broker and Briny Breezes resident James Arena believed he could convince President Trump—with the help of Vanilla Ice and Donald Trump Jr.—to purchase the mobile home park for $1 billion and turn it into the Trump presidential library.

The story gained traction thanks to a Dec. 20 story published in The Palm Beach Post. In the article, Arena admitted he had reached out to Vanilla Ice, knowing he was close to the Trump family.

“Vanilla Ice ran it by Donald Jr.,” Arena said in the Palm Beach Post piece. “He called me back and said, ‘Man, I think they’re really into it.’”

What Does Vanilla Ice Have to do with Real Estate?

For those up on their “where are they now?” trivia, you already know Rob VanWinkle (aka Vanilla Ice) isn’t a rookie when it comes to real estate.

Vanilla Ice skyrocketed to fame in 1990 with his hip-hop hit, “Ice Ice Baby” and, if you were a child in the ’90s, “Ninja Rap” from the Teenage Mutant Ninja Turtles sequel. In the mid-’90s, he started studying real estate and flipping homes, which led to a career reinvention for the performer.

In 2010, he launched “The Vanilla Ice Project”,  a reality show on the DIY network. The show’s ninth season aired in August 2019. During the show’s second season, he released Vanilla Ice Project – Real Estate Guide, a book on finding success in the real estate world. 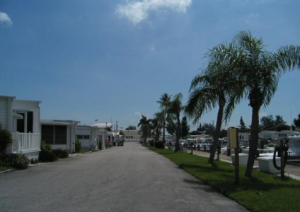 Every United States President has a dedicated library in their home state. While President Trump was born, raised and has resided in New York for most of his life, he recently changed his residency to Palm Beach County. Considering President Trump and First Lady Melania have been residents since October, Florida could be a potential home for the presidential library.

As for the potential Trump presidential library site, Briny Breezes is a 43-acre mobile home park that is incorporated into the town, making it one of two mobile home parks in Florida that also serve as a recognized local government. This isn’t the first time whispers of a Briny Breezes sale hit the community. In 2007, Briny Breezes had a $510 million offer, which fell through. In that same year, Donald Trump had his eye on the town, but likewise, nothing came of it.

As for the current sale whispers, residents heard of the $1 billion price tag during a meeting where Arena brought up the possibility. While members have varying political stances, they seem to agree a big-ticket sale would be good for the community and its residents.

“Trump is not my favorite and I would hate to see Briny disappear, but I’m a realist,” Dana Littlefield, who has lived in the town since 1955, told The Palm Beach Post. “I’ve got 10 grandchildren and we’re talking 10 college educations. If Briny can be sold for a billion dollars, it’s like a no-brainer. That’s a lot of money.”

Resident support is key to any sale, whether it goes toward a presidential library or not. Since Briny is run by a board of directors, any sale would have to be approved by property owners who represent 67 percent of stakeholders.

“Don hasn’t spoken to anyone about building a presidential library and has never even met Vanilla Ice,” a spokesman for Donald Trump Jr. told The Daily Beast.

“I don’t know Donald Trump Junior., don’t understand why they said that? but if they want me to build a library In Palm Beach on the ocean, I’m in. #VanillaIceProject.”

At least Vanilla Ice still has hope for the reimagined Briny Breezes.