Park Model Homes Are Trending In a BIG Way

The recreational vehicle industry has been trending up in recent years, but a recent uptick in one of the “darlings” of the class, park model RV homes, seems to be outpacing all else.

“It’s unbelievable,” Grymonprez said about sales activity. “We had a little over 40 percent of U.S. shipments of park models last year, and this year we’re up to 42 percent through February. And we just had our best March shipments ever. We’re awaiting national numbers to see if we’re still ahead of the industry, but it’s looking good.

“We just had the single best month of park model sales we’ve ever had. It’s booming,” he said.

So, How Are Park Model Homes Built?

A park model home is built to the ANSI A119.5 RV code, which means it’s technically a vehicle. It’s built on a chassis and mounted on wheels. The anticipated use of the park model is as a seasonal home, or getaway. However, in the current housing climate, many park model RV owners are using their seasonal getaway as more of a permanent dwelling.

See what a park model RV home is for a more detailed definition and in-depth breakdown of how they are used and why they are unique.

Features of a Park Model RV include:

With the gaining interest and uptick in sales for park model homes, the market appears to be poised for growth.

Total U.S. park model sales in 2015 came in at $15 million. The 2019 projection is in excess of $75 million. Still, there are only 3,000 park models sold each year in the United States, Grymonprez said. Skyline Champion shipped 500 park models during 2018 to Texas, which is the biggest market.

Skyline Champion Corp. primarily sells manufactured homes, an industry that likely will ship more than 100,000 units this year. However, 13 of the company’s 37 manufacturing facilities nationwide have a regular schedule for park model construction. And added interest in the product certainly would mean a ramp-up in production.

“Our company, we’re really growing our park model business. We have a really good attitude about park models. One of the primary initiatives we’ve embraced is figuring out ways to build park models in our existing plants without reducing the production of manufactured housing,” Grymonprez said.

Who has created the demand for park model homes?

David Eitrem is the vice president of marketing for Titan Factory Direct. The company is an industry leader in factory-built home sales and also has a dedicated site for park models. Titan is a retailer for the Athens Park Models from Skyline Champion.

Titan currently is receiving a spike in web hits and impressions, Eitrem said. However, Titan has yet to see a similar spike in leads for park model buyers. This likely is a combination of lag time between buyer research and point of sale, as well as an indication of very early consumer interest.

“You may see more people looking into park models because they’re planning vacations. Perhaps they’re looking into a place that offers park model RV rentals,” Eitrem said. “So there likely is a lot of activity in researching what a park model is.

“So, what we’re seeing likely are queries on general interest, and then there will be a smaller portion of that audience that’s showing a very early interest in buying a park model,” he said.

But, Eitrem said, park model sales for Titan have doubled each of the last two years.

“We don’t see a seasonal trend particular to park models,” Eitrem said. “About 50 percent of our sales come at the beginning of the year from investors who are filling in what they need in their parks. And they usually just call us, because they already know what they want.”

Baby Boomers nearing or in retirement may be a driving force in the park model home craze. But the individual Boomer buyers are in good company with younger consumers, who are expressing great interest in downsized homes. Or, perhaps, a seasonal getaway on the water.

What are the Younger Park Model Buyers Doing?

“The younger buyers are seeing tiny homes on HGTV, and they’re really gaining interest because they see park model homes as something similar to tiny houses.”

There is a significant amount of confusion in the marketplace regarding the similarities and differences between tiny houses and park model RV’s.

But much of the interest amounts to buyer education, which is valuable for the entire market. Younger buyers may be less established than their counterparts to make the purchase, for now.

It takes good credit and 10 percent down to buy a park model, which carries an average sticker price of $60,000-plus.

Perhaps the younger customer has a limited credit history or lack of savings that could be put toward a large purchase. That younger buyer may contribute to the lag between web impressions and purchases. However, the younger buyer is the emerging consumer for park models and all variety of factory-built dwellings.

“Sometimes you have parents come in and buy a park model and put it in the backyard, kind of like a guest house or a granny pad,” Eitrem said. “For the actual younger buyer, it’s definitely more of a curiosity.” 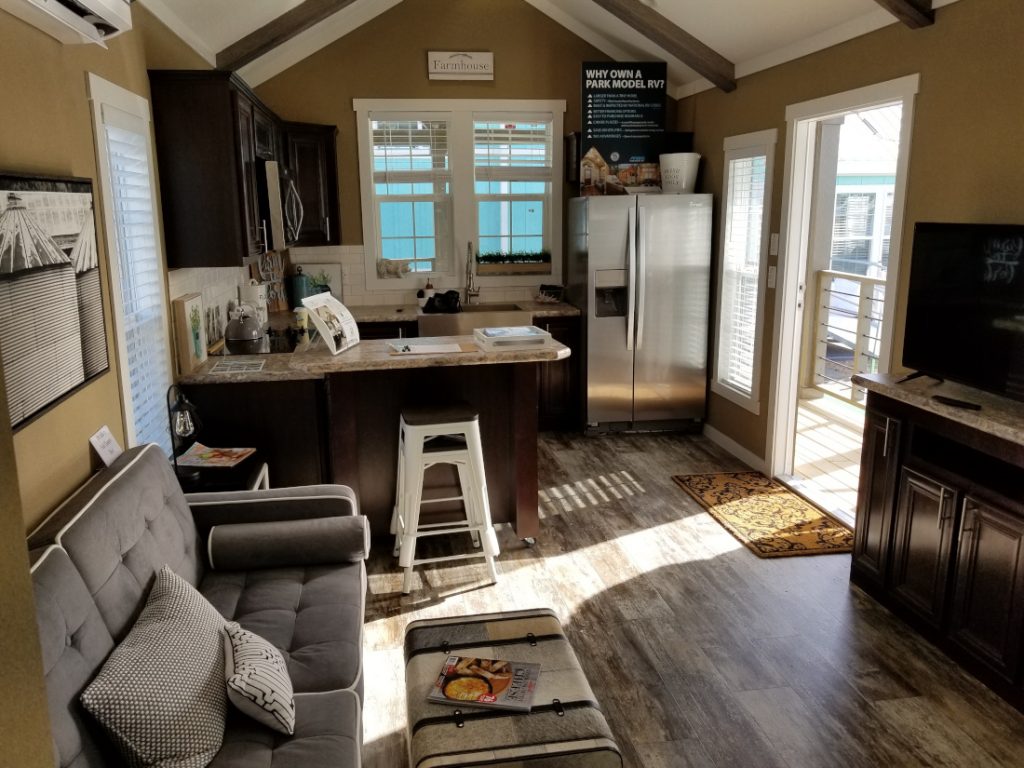 A lot of folks looking at fifth wheels are going to a park model on price alone, Eitrem said.

“I think one of the reasons park models are picking up, in general, is because of the increased quality,” Eitrem said. “The new park model RVs are coming with textured and taped walls, stainless appliances and other perks… this will definitely get people who are considering other options very interested in a park model. It’s basically like a luxury home, but smaller.”

How is the Market for Luxury Features in Mobile Homes in 2022?