Green Acres is one of the many South Houston manufactured home communities hit by Hurricane Harvey. Residents today are emerging from water-damaged homes as community management and maintenance teams check on people and clear away debris.

“I’ve been able to walk through about half of the park now and everywhere I’ve gone, there has been damage, including water in homes and cars,” said Catherine Hinojosa, Green Acres community manager. “Water was definitely coming in from the rain, but also came in from the flooding. I feel so bad. Some ladies were crying and still very scared. This is their home.

“We have our residents asking about who to contact for clothing donations,” she added. “People are having to throw out a lot of what they own, including clothes and furniture.”

Green Acres is located off Hooper Road and neighbors a pair of other mobile home communities hit by Hurricane Harvey. While her community sustained damage, Hinojosa said, adjacent neighborhoods were under deeper water.

“People needed to swim to safety, or boats were going in,” Hinojosa said.  The Green Acres maintenance staff did a good job of limiting the flooding. Workers waded through and cleared away storm water drains.

“That’s hard to do, and I’m sure many neighborhoods weren’t able to find where the storm drains, or even if they did find them, they would be hard to clean under the rising water,” she said.

In Victoria, Texas, southwest of Houston, John Goldman had recently invested $200,000 in the expansion of his park, Deer Crossing. Goldman’s property sits about 30 miles off the gulf. High winds peeled off part of the roof on one of the multi-section homes in his community, and many others sustained lesser damage.

“Right now, I have about 20 people in my yard cleaning up, trimming trees and such,” Goldman said on Thursday morning, six days after Hurricane Harvey came ashore and stalled.

Goldman said Victoria received about 20 inches of rain, at least partly because the eye of the storm stalled above them during a short time when the Houston area was under a torrential downpour.

“We do have electricity and we have water, even though we need to boil it. But we’re doing OK all things said… we’re going to need to replace a lot skirting,” he said. “You can see the sky a lot more now. It’s weird to have all of that foliage and coverage gone. The trees are bare. The place looks different, but we’re safe.” 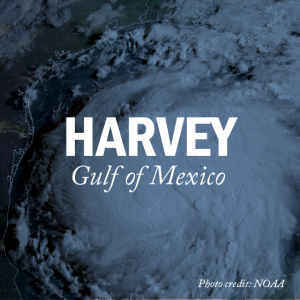 Some parts of Houston were hit with more than 50 inches of rain, the most rainfall ever recorded from a single storm in U.S. history. Nearly 40 people were reported to have died from the storm, as of midday Thursday.

One weather analyst said the amount of rainfall in South Texas during the last several days, 19 trillion gallons, would raise the entire Great Lakes water level by more than 11 inches.

Temporary and Replacement Homes Needed for Communities Hit by Harvey

With an estimated 30,000 flooded homes, finding places to live for area residents in need will be a primary task in the weeks and months to come. On Wednesday, in an effort to help with recovery, MHVillage and its sister company Datacomp, provided the Federal Emergency Management Agency (FEMA) with a free report of mobile homes for sale in the state of Texas.

The report details more than 2,300 homes for sale across the state.

FEMA in recent days has reiterated its need to ramp up inventory of manufactured homes for relief efforts in Texas. Much of its inventory had been depleted during the last year given flood recovery efforts in Minnesota and Louisiana.

Ernie Sanchez is a salesman for RD Mobile Homes in Pearland, south of Houston. The storm and subsequent flooding kept the dealership shuttered for more than five days.

“We didn’t have any damage to inventory,” Sanchez said. “We had some flooding, but it’s subsided completely. Obviously, there’s going to be a need for housing. I’m assuming we’re going to be very busy,”

However, Sanchez pointed out, the housing problem for communities hit by Hurricane Harvey is as much about a location for a new home as it is about the structure itself.

“It’s too early to know exactly how much of an impact on Houston this storm will have. But the way I look at it, people are going to be looking for homes, and mobile homes make sense, but there’s a limited number of places to put them,” Sanchez said. “In Houston, you can’t have a mobile home placed anywhere but in a community, so that’s something that might need to be set aside while this recovery is underway.”

If you’re interested in lending a much-needed hand to the recovery effort, here is a Houston Chronicle news story on a few ways to get involved.

FMHA Calls for Information After Irma