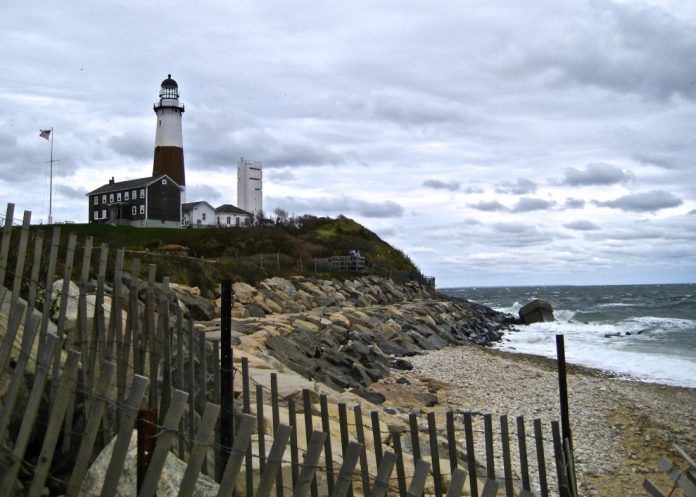 But all things are relative, right?

Like the tiny-house trend, manufactured housing and modular homes are becoming hot for people who want to downsize, while also living in an aesthetically pleasing home. It’s a way to have a taste of luxury while being mindful of cost.

And things are different in the Hamptons, at great little community called Montauk Shores, specifically.

Known as “Montauk’s Best Kept Secret”, Montauk Shores originally was a campsite in the 1940s and 1950s. During the 1970s, residents came together to purchase the site and save it from bankruptcy, making it the first mobile-home-park condominium in New York. It since has grown into a haven for millionaires and billionaires alike and is managed by a seven-member board.

Montauk Shores is an oceanfront manufactured home community located on top of a bluff in East Hampton. Montauk itself has 3,662 year-round residents, but that all changes each summer, with an estimated 30,000 vacationers.

When heading to Montauk Shores, you’ll be surprised at its humble community entrance. Nothing fancy here, just a simple sign that welcomes you as you enter the park. Montauk Shores boasts 152 owned and 47 leased sites on 20 acres and 900 feet of coastline. Looking on the amenities page of its website, you’ll need to do some good scrolling to get through it all.

These are just a few amenities Montauk Shores offers:

At first glance, Montauk Shores looks like your typical manufactured home community. Take a closer look and there is so much more. In fact, the community has been dubbed “Billionaires’ Corner” given its high-status residents.

While the community keeps a modest look on the exterior, residents spruce up their interiors to the nines.

There are many reasons why the ultra-rich choose Montauk Shores as a getaway dwelling place. Some seek refuge in their manufactured home, while others use theirs as beach home to clean up after a day at the ocean. In a 2017 New York Post article, it was revealed that VitaminWater co-founder Darius Bikoff had never slept in his home and strictly uses it as a hangout.

Bikoff isn’t the only well-known member of the Montauk Shores community. Other property owners include hedge-fund manager Dan Loeb, film producer Karen Lauder, and socialite Bettina Stelle. There have even been a few Jimmy Buffet appearances within the community.

In fact, the Montauk area has grown into a fixer-upper of sorts for the wealthy. Well-known names like Apollo Global Management co-founder Marc Rowan and celebrity chef Eric Miller have invested millions in commercial properties like Duryea’s Lobster Shack and Dave’s Grill to make updates to beloved area businesses.

However, Bikoff caused a stir with locals in 2013 when he dropped $15 million on East Deck Motel, a popular surfer hangout. In 2014, he demolished it in order to create a private surfing club. Area residents were so angry that someone would turn a communal sport like surfing into a private club that the plans never came to fruition. The land now is being marketed as plots for multi-million-dollar homes.

In July 2019, a report from Douglas Elliman and Miller Samuel showed the worst second quarter for Hamptons real estate in eight years, with the average sale price falling 2.5 percent. The low second quarter marked a year and a half of declines in the market.

Experts say there are a few reasons for the decline. Too many luxury homes (in 2019, the number of home listings doubled) and a tax-law change that leaves little incentive to purchase a home or second home in the Hamptons.

Cody Vichinsky of Bespoke Real Estate in the Hamptons was quoted by CNBC saying inconvenient locations and overpriced homes are driving down the market.

“You might look at Zillow and see nine properties on the oceanfront in Southampton, which looks like a lot,” Vichinsky said in the article. “But then you dig into it and you see that six of them are in places where you’d never want to live, with constant helicopter noise or a triple dune or encumbrances. And then the others, the price is ridiculous. When a property is priced decently, it goes.”

However, for Montauk Shores, there’s still demand to be part of the Billionaires’ Corner. The community only has a handful of manufactured homes available, with one of those homes increasing in value by more than 9 percent since its last listing three years prior.